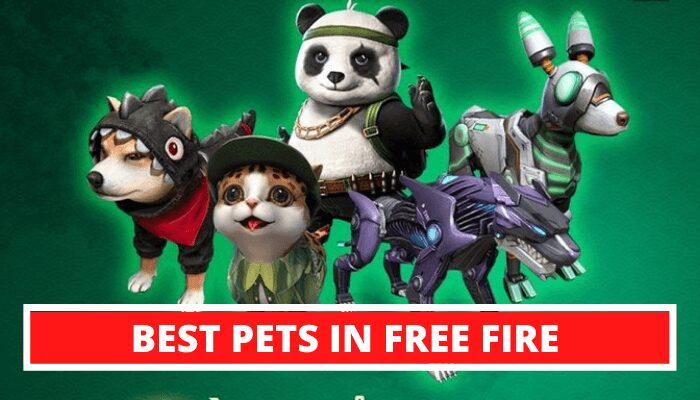 What are Pets in Free Fire?

Pets are a sort of unique feature in Free Fire that adds a sort of value to the overall kit of your character. There are more than 10 different pets in Free Fire. Pets should always be selected according to your overall team’s playstyle and should not only be beneficial to you but your overall team as a whole.

These are the best and strongest pets in Free Fire 2023:

Falco is one of the newest addition to the Pet roster in Free Fire. He has this ability called “Skyline Spree” which increases your glide speed after jumping at the start of the game. This glide speed increases furthermore once you open the parachute. This trait is applied to the entire team and can be used by teams that want to land faster at hot zones.

Levels : The Glide speed increases by 15% once the you jump and increases up to 25% after opening the Parachute. The Glide can be increased from 25% to 37% as you keep maxing out your pet.

Best Character to Pair up : Falco can be paired with any character .

Character Description: Falco is inspired by the real-life bird falcon which is a predator bird quite famous in the South American region. Falcons are known for the speed, agility, and killer instinct. They can glide long distances without tiring themselves.

Ottero is cute but one of the strongest pet in Free Fire and is often used by aggressive players for the playstyle he brings to the table. He has this ability called “Double Blubber” which increases your EP while applying a Medkit or Bandage. The amount of EP restored increases with the level of the pet. This increase of EP is Extremely useful for people taking fights quite often and be used in clutch situations.

Best Character to Pair up : Ottero is best paired with aggressive characters like Chrono , DJ Alok and Skyler.

Character Description: Ottero is inspired by the real-life animal Otter which is a carnivorous type animal found in various parts of Africa and Asia. otter are excellent swimmers and they hunt small animals and reptiles for their living.

One of the best pet in Free Fire, Robo was one of those pets which was quite a hit upon its launch and is also one of those pets which is quite used by aggressive players. It has this ability called “Wall Enhancement” which increases the overall HP of your Gloo Wall by adding a special shield to it. This increase in HP can be annoying to enemies and can be used to pop in a syringe or Medkit while battling out.

Levels: The Hp of a Gloo Wall increases by 60 in the initial levels and the HP can be increased up to 80 as the Levels go by.

Best Character to Pair up Robo is also best paired with aggressive characters like Chrono, DJ Alok, and Skyler.

Character Description: Unlike most of the Free Fire pets which are inspired by real-life animals or birds Robo is a fictional pet. The description of Robo is “Once a helpful house robot, Robo ended up on this island after wandering astray”.

READ ALSO: How to Get the DJ Alok Character for Free

Detective Panda is a pet that is mainly designed for aggressive players who go after kills and assists. He has this ability called “Panda Blessing” which increases the HP of a player after a kill. This increase in HP is quite a clutch ability when you are being third partied by another team after a fight.

Levels: The increase in HP is 4 in Level 1 and can be increased up to 7 HP as the level progresses.

Best Character to Pair up Detective Panda can be paired with any Free Fire character.

Character Description: Detective Panda is inspired by the real-life Chinese panda or koala Pandas. Pandas are Lazy creatures and are also endangered species. They usually eat bamboo and prefer to live in high-altitude areas that are low in temperatures.

Mr.Waggor is the best pet in Free Fire because of the ability he brings to the table for teams who run out of essential accessories like Gloo Grenade. His ability “Smooth Gloo” allows him to provide Gloo grenades to players using him from time to time without consuming anything. This makes him extremely useful at end battles where everyone is low on supplies and he provides you a grenade out of nowhere.

Best Character to Pair up Mr. Waggor can be paired with Characters like Captain Booyah ,Dj Alok A124, Chrono and Skyler.

Character Description: Mr. Waggor is inspired by the penguins of the antarctic. penguins are a group of aquatic birds that cannot fly. They mostly prefer to live on Land as well as Sea. They prefer to eat fishes and other Small Aquatic Animals.