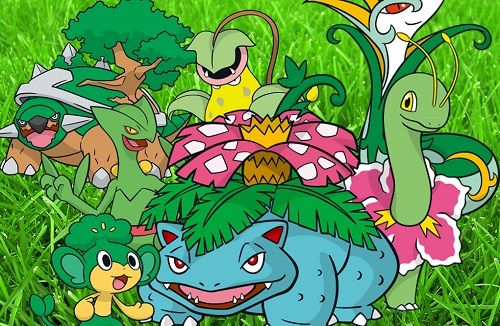 The most highly captured and wanted Pokémon’s in Go right now are Grass Type Pokémon’s But do you know the easiest counter for grass-type pokemon? If you don’t know, don’t worry our pokemon expert at SportingFree has compiled a list of the best grass pokemon in the Pokémon GO right now with all the counters to capture each one of them.

Tangrowth is a grass-type Pokémon with a maximum Combat power of 3425. It is a nonlegendary type of Pokémon which is usually found in the Sinnoh region. This Pokémon can be boosted under Sunny weather conditions.

It is an evolved type of Pokémon that actually starts as a “Tangela” and later transforms to Tangrowth. People say that Tangrowth is usually covered in Vines and this vine helps tangrowth to protect itself from enemies and other predators.

Weakness: The best Pokémon’s to take own Tangrowth are Charizard , Gengar & Beedrill.

Exeguttor is a grass and psychic type Pokémon with a max CP of 3408. This is a nonlegendary type of Pokémon which is found in the Kanto Region. Legend says that Exeguttor has several heads tie together and these heads grow under extreme sunlight and when the heads fall off they devolve into Exeggcute.

This is one of the best grass type Pokemon in Pokémon GO which usually performs well in battle under Sunny & windy weather Conditions. It is also one of the few Pokémon’s which can devolve into its original form, “Exeggcute”.

Weakness: The best Pokémon’s to take own Exeguttor are Genesect , Charizard & Scizor.

Mega Abomasnow is Snow & Grass-type Pokémon with a Combat power of 3840. This Pokémon is found in the colder Sinnoh regions and is a rare Pokémon due to its weird combination of snow & grass. Sunny & snowy weather conditions favor Abomasnow during a battle scenario.

The people living in the Sinnoh region often say various stories regarding Abomasnow that it lives alone in the mountain caves and often covers itself with huge piles of snow. Abomasnow starts evolving from Snover and keeps on transforming till it reaches the shadow form.

Weakness: The best Pokémon’s to take on Mega Abomasnow are Houndoom, Charizard & Heatron.

Torterra is a mix of both Ground & Grass-type Pokémon with a maximum Combat power of 3318. Torterra has various evolving stages starting from a mere Turtwig that evolves into a Grotle, which further evolves into a Torterra.

Torterra being a grass Pokémon, is boosted only by Sunny weather conditions. Unfortunately, people living in the Sinnoh region often mistake Torterra for a tree due to the large trunk it carries on its back.

Weakness: The best Pokémon to take on Torterra is, Glaceon, Weavile & Mamoswine.

Venusaur in its mega form or Mega Venusaur is the best grass type Pokemon in Pokémon GO right now. This Grass & Poison-type Pokémon has a maximum Combat Power of 4181, making it one of the few Pokémon’s with a large CP count of over 4000.

It is usually found in two forms Mega form & the Shadow form. It is a highly Evolved dorm of pokemon starting as a Bulbasaur, then evolving into an Ivysaur & further Evolving into a Venesaur. Windy & sunny weather conditions boost this pokemon.

Venusaur has a huge flower on its back which has huge vivid color patterns & this flower scent calms people’s emotions & pokemon.

Weakness: The best Pokémon to take on Mega Abomasnow is Reshiram, Charizard & Mewtwo.