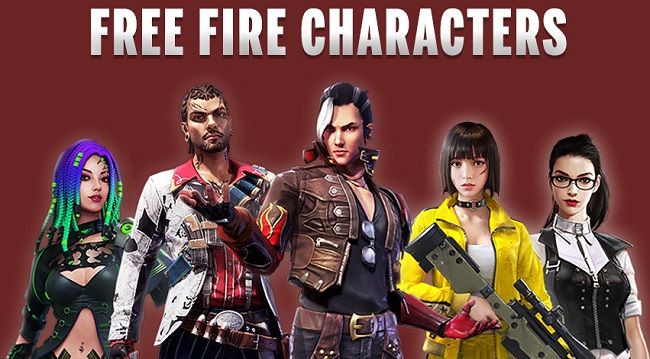 Free Fire is one of the most competitive games on the mobile platform in 2022. Due to its extreme competitiveness, many new players find it very difficult to master and play the game as they are often confused with what abilities to use or what characters should play. So to make it simple, we are rounding the top 5 characters in Free Fire which are extremely beginner-friendly. Here’re the top 5 best Free Fire characters for beginners.

Ford is one of the best beginner-friendly characters in Free Fire. It is a character that can be easily purchased as it only cost around 2000 gold coins or 199 Diamonds which is cheap compared to other characters. He is also straightforward to use, which makes him beginner-friendly.

Abilities: “Iron Will”- This ability of Ford helps new players to take reduced damage outside the zone as they understand the concept of zone & zone rotation. The level of damage taken by the player increases as he/she increases the level of the character.

Maxim is one of the oldest characters in Free Fire, released way back during the game’s early stages. He is also extremely beginner-friendly as his ability revolves around healing abilities which helps new players to understand the concept of healing & protection.

READ: How to Unlock all Gun Skins in Free Fire using LuluBox for FREE

He is currently available to unlock the game in-store and purchased for 499 Diamonds or 8000 Gold coins.

Abilities: “Gluttony”- This ability of maxim allows him to eat mushrooms as well as use medkits at a much faster rate. This ability is self-centric and does not help much for the overall team, But as a newcomer, it is crucial to be self-reliant when playing as a solo. The timer for using a medkit lowers as the level of the character keeps on increasing.

Olivia is one of the most underrated female characters in the game right now. She is extremely useful for beginners who play with a team that is also learning the curves of the game.

Her abilities revolve around healing nature, similar to maxim as discussed above, but her abilities benefit the entire team instead of being self-centric. She is also one of the fewer cheaper characters in-game with a cost of 2000 Gold Coins.

Abilities: “Healing Touch”- This ability of Olivia is beneficial for the team and makes as one of the best support characters in Free Fire. Olivia can use this ability to revive knocked players with a certain amount of HP, thus helping them return to battle sooner.

Nikita is one of those characters in Free Fire that helps new players learn the art of Combatting. she is currently overshadowed by other characters like DJ Alok, Chrono, and Skyler compared to fighting.

Her ability revolves around using guns faster, which helps new players to engage in more fights and overcome their fear of pushing enemies. Currently, Nikita can be unlocked for 2500 Gold coins in the store.

Abilities:-“Firearms Expert”- Nikita can reload submachines when wielded way faster than her allies. This faster reloads time is a clutch advantage for new players when facing a 1vs 1 duel with enemies. This trait can be further increased by levelling up the character, and at max level, Nikita wielding a submachine is nearly impossible to fight at a close range.

Kelly is the best Free Fire character for a player who has just installed the game on their mobile. Kelly is of those characters in the game, which is extremely difficult to catch up with as she can use her sprinting abilities to flee away from enemies and hide and heal behind a gloo wall at any point.

New players often tend to panic when they are under attack in an open environment kelly helps those players to move behind a cover fast with her abilities immediately. She is currently available for 2000 gold coins for unlocking in the store.

Abilities: “Dash”- Kelly can sprint much faster than other players when she activates this ability. The ability allows the player to sprint & hide behind covers enabling players to heal quickly return to battle.