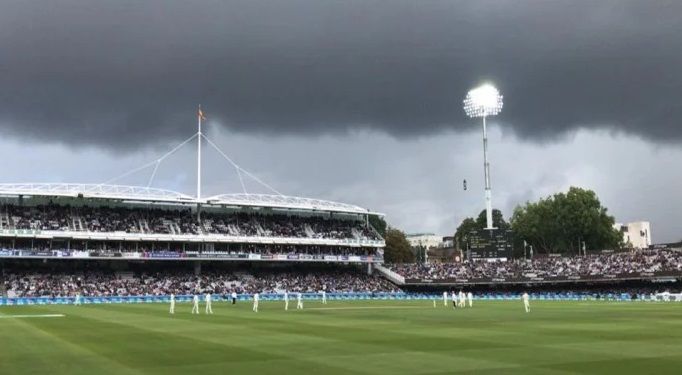 What is bad light stopped play: Why cricket stops due to bad light?

Test cricket has a rich history, and all know it, but certain rules about test cricket are obscure to people. One such rule is bad light. The rule came into the limelight after the ICC World Test Championship 2022 final between India vs. New Zealand got hampered due to bad light. The rule has faced a lot of criticism from cricket experts and fans across the world. You might have seen the message “bad light stopped play” on the screen during Test matches when the umpire declares bad light. Let’s see why cricket stops due to bad light and know about the bad light rules.

Since cricket is an outdoor sport, it is played in natural light mostly. In T20 and ODIs white ball is used that can be easily spotted in gloomy weather. But, in test cricket red ball is used.

Why cricket stops due to bad light?

The most prominent reason why test cricket is stopped in bad lights is it can cause injuries to batsmen, wicket-keeper, or fielders.

The red ball used in test cricket is not easy to spot in the dark and gloomy conditions. In such conditions, umpires bring the game to a halt and wait for the light to get better. In worst situations, the remaining day’s play is suspended by the umpires.

How do Umpires decide whether it is bad light or not?

In order to measure the visibility umpires use a light meter. There is a set standard, if the light meter shows visibility lower than the standard then umpires stop the play due to bad light.

When there was no light meter in earlier days, umpires used to decide by asking the batsman whether they could see the ball or not. In some conditions, umpires could also ask the fielding team captain to use spinners instead of seamers.

Why has the bad light rule faced criticism?

There is a lot of uncertainty regarding the rule. The biggest question is the time umpires should wait before canceling the day off. Various experts of the game have suggested ICC continue the play using floodlights. There have been instances in the past where teams were snatched of victories because of bad light.