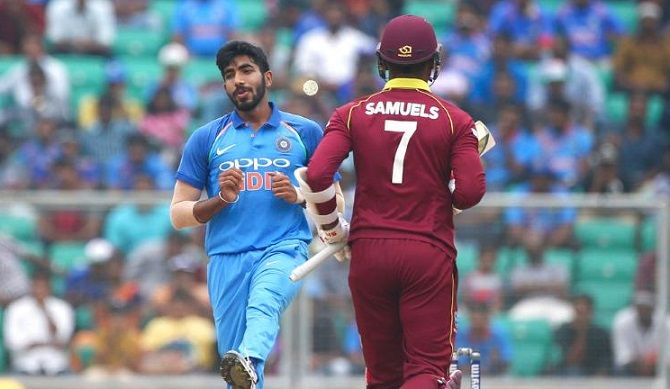 IND vs WI Dream11 Team – Check Dream11 Team Player List, West Indies vs India Match Prediction Dream11 Guru Tips ICC World Cup 2019: India won the first match of the 3-mtach T20 series and now its time for the second T20 match at Thiruvananthapuram. Near the end of the innings, Carlos Brathwaite started to hit furiously. He single-handedly brought West Indies back into the match but was unable to secure a win. The match against South Africa yielded no result as the match had to be called off because of rain. Their first match was against Pakistan, which they had won very easily.

Out of the 6 matches that they have played, West Indies won 1 and lost 4. The match against South Africa was called off because of rain. Currently, in the Points Table, they are in the 8th position with 3 points (Net Run Rate: +0.190). India is one of the only two teams to still remain undefeated in the ICC Cricket World Cup 2019. Their last match was against Afghanistan, who had put up a good fight, on 22nd of June 2019. Due to rain, the match against New Zealand had been abandoned without a toss. The Indian team has been in really good form.

Out of the 5 matches that they have played, India won 4. Their match against New Zealand had to be abandoned because of rain. In the Points Table, currently, they are in the 3rd position with 9 points (Net Run Rate: +0.809).

West Indies
All-rounder Andre Russell has been ruled out of the ICC Cricket World Cup 2019 because of his injured left knee. Batsman Sunil Ambris has been confirmed as his replacement.

India
It is most probable that India would stick with the same team that they played in the previous match. No changes seem to be necessary.

Afghanistan had put up a tough battle against India and West Indies had nearly won their match against New Zealand. Both the teams have excellent players but West Indies is currently very inconsistent.

At the Wankhede Stadium, Mumbai, on the 31st of March 2016, these two teams had faced each other at the 2nd Semi-Final of the ICC World T20 2016, where West Indies had won. The format might be different but you can never say what might happen.