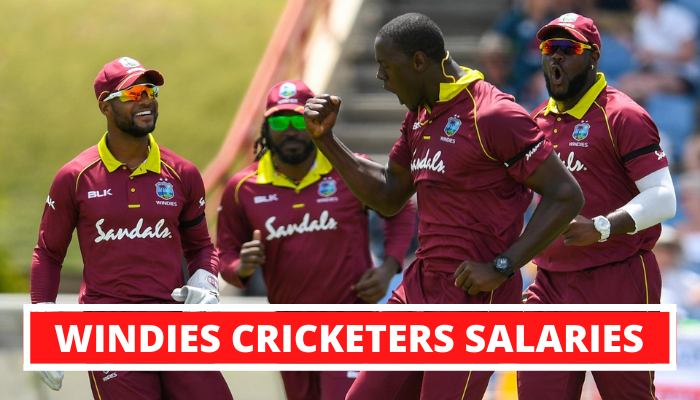 Cricket West Indies has announced the central contracts for the Men’s team for 2022/22 season. West Indies cricketers salaries are based on their international retainer contracts.

Whenever the name West Indies cricket comes up everyone is bound to think about their passionate sportsmanship, power-hitting and love for the game. Gone are the days of glory when West indies used to dominate cricket in the 1980s and 90s. Since the late 2000s, West Indies cricket has been in shambles as the team has shown inconsistency and slipped down the ICC rankings.

One main reason for the inconsistency is the mismanagement and negligence from the West Indies Cricket Board. The Board’s financial situation has been grim since the last decade. This was evident since 2016 when the then captain Darren Sammy publicly addressed the financial woes of the team after they won the T20 world cup trophy.

The global pandemic made the situations worse as the already debt-ridden WI Cricket board had to borrow money to pay the players. The Board’s debt had mounted to a whopping $20 million which led to a 50% cut in the West Indies cricket players salaries.

Because of the financial crunch, many players choose to play in foreign T20 leagues as freelancers rather than for West Indies. Hence the squads are very inconsistent and keep on changing. West Indies have announced Men’s Central Contracts for 2022.

Cricket West Indies (CWI) has announced the international retainer contracts for the West Indies Men’s Team for the 2022-2022 season.

The season 2022/22 will be played from July 2022 to June 2022 and a total of 18 players have been offered contracts for the upcoming season. Players like Nkrumah Bonner, Joshua Da Silva, Akeal Hosein and Kyle Mayers have been awarded international retainer contracts for the first time. Newly appointed Test captain Kraigg Brathwaite has received a contract for red ball and Darren Bravo has received a contract for white-ball cricket.

Jason Holder is the only player to get an all-format contract while former vice-captain Roston Chase has lost his contract for all formats. Prominent names like Shimron Hetmyer and Sheldon Cottrel have missed out on the white ball contract.

Here is the complete list of the 18 players who are offered the central contract for the 2022-22 season.