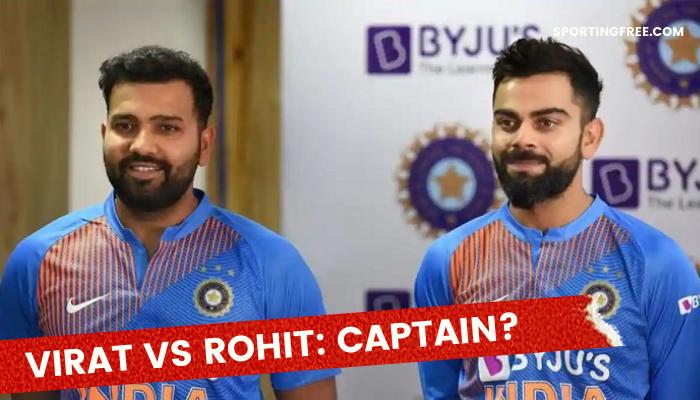 Virat Kohli vs Rohit Sharma: Who is better captain Rohit or Kohli?

Virat Kohli vs Rohit Sharma: A debate is on a rise these days and it’s about should Virat Kohli be replaced as the captain for the national side? And the obvious choice that comes to mind is Rohit Sharma. No doubt that Virat is a remarkable batsman, but if there is one problem that’s been consistent with BCCI is that they are very rigid with the fact that the best batsman of the team will also be their captain.

But recent results have raised questions in fans’ minds and left them divided as who is a better captain Rohit or Kohli. Hence, this article will give you insights into who should be a better prospect for the role.

First of all, the mentality that many in the decisive authority and fans need to change is to support split captaincy. A recent comment by Indian Legend Kapil Dev read “India doesn’t have the culture of split captaincy”.

This statement itself tells you about the rigid nature of the board. When a Cheteshwatr Pujara is best for Test and Rishabh Pant is best for shorter form, then why can’t the horizons be broadened for Captaincy?

Coming to the main question of should Rohit Sharma be replaced as the captain, then the answer to this can’t be just a ‘Yes’ or a ‘No’. The better answer would be to compare their stats in all three formats and then form a notion.

Who is better captain Rohit or Kohli?

Here’s the list of comparison of Virat Kohli vs Rohit Sharma captaincy statistics in all three formats is as follows.

Virat Kohli has a win percentage of 60% in test matches winning 33 matches out of 55 he captained. He is the most successful test captain for the Indian side and to be honest Virat has captained more matches than Rohit has played Tests for India.

Thus, it’s pretty clear and evident that despite being a better red-ball cricketer than Rohit, Virat is the obvious choice in the test formats and Rohit is yet to captain the team in Tests.

Kohli is the T20 captain for the team, but this is where the real debate comes in as Virat has a win percentage of just 59.45%. And on the other hand, Rohit who captains the team in Virat’s absence and still got a winning percentage of 80%.

Thus, it’s a very clear choice that Rohit should be given the command to lead the side in the shortest format of the game.

For some, statistics might not be a valid point to present. Then if we look at the trophies won then Kohli has failed to win any trophy be it for India or with RCB and on the other hand, Rohit is the most successful captain in IPL winning 4 trophies as captain.

When it comes to ODI, then Virat has a winning percentage of 71.83% and Rohit a percentage of 80%. But to be honest, here the stats don’t matter as Rohit is an occasional captain in ODI and has captained just 10 matches.

But ODI and T20 draw a similarity of being white ball limited format and Virat has failed to produce results recently thus giving a chance to Rohit won’t be a bad idea.

Virat is a better prospect for the test captaincy and should remain as the Test captain. But for T20 and ODI, it’s time for Virat to step down as Rohit’s decision making are better than Kohli’s and should be given white ball captaincy.