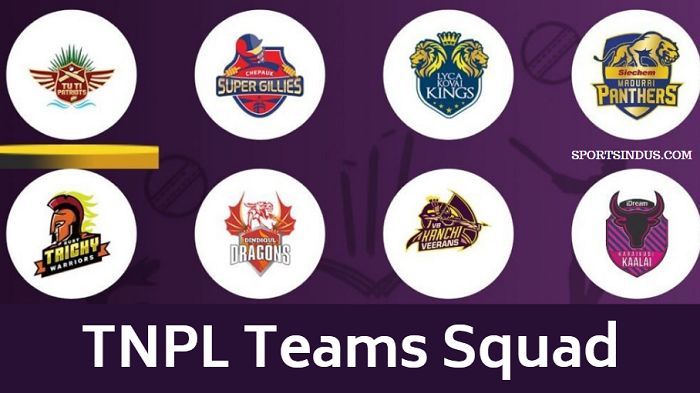 The Tamil Nadu Cricket Association governing council has announced the schedule for the upcoming season of the Tamil Nadu Premier League T20. The TNPL 2019 is scheduled to be played from July 19 to August 18 across three venues. The TNPL player drafted is set to take place on July 4 and after the completion of the draft, TNPL 2019 Teams Squad and full players list will be released.

The TNPL is an Indian Domestic T20 league which is limited to Tamil Nadu state players only. In the TN premier league, a total of eight teams are taking part and a total of 32 matches are going to play. All the eight franchises can now buy and sell players in the trading window. Each TNPL 2019 squad must have a minimum of 16 players and maximum 22 players including two district players.

South India has some extra talented cricket player in their state, So TNPL 2019 can be the platform for them to showcase their talent. There are some star cricketers who played for the national team are also going to be part of this Tamilnadu premier league. Players like Ravichandran Ashwin, Murali Vijay, Dinesh Karthik are also part of this league. So, the youngster has a good opportunity to learn something from these senior players.

There is a total of eight teams in this league some teams may have star players this could be plus point for some teams but you know anything is possible in the T20 cricket. So it is going to be an exciting league and we can expect some new faces coming for the Indian cricket team in future from Tamilnadu premier league. Get the full players list and TNPL 2018 teams squads – Chepauk, Karaikudi, VB Thiruvallur, Madurai, Tuti Patriots below.

Many players have submitted their names for the Tamil Nadu Premier League’s (TNPL) 2019 but after the draft process only, the complete TNPL 2018 teams squad will be confirmed. Till then see the TNPL squad of the last season.

In the inaugural edition saw the eight franchises pick a total of 151 players in the auction. In the TNPL players auction, each franchise is required to select two players each from the districts as well as the Under-19 category.