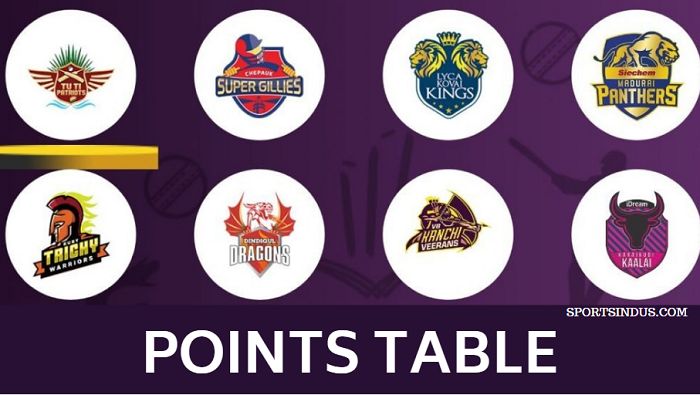 Tamil Nadu Premier League (TNPL) 2019 is all set to get underway from July 19. The 2019 edition of professional cricket league is expected to be bigger and better as TNCA have announced several reforms for the TNPL season 4. Get the TNPL 2019 points table and teams standings of all the eight teams who are playing in the league.

The points table of TNPL 2019 will be updated after every match based on the official rules by the Tamil Nadu State Cricket Association. The  TNPL points table which will consist of details like teams rankings, their wins, losses, matches with no result and the Net Run Rate. All the teams will take on each other to be in top four and reach the TNPL 2019 playoff rounds. CHECK: TNPL 2019 Schedule The TNPL 2019 features 32 matches including 28 group matches, 2 qualifiers, 1 eliminator and a final match which is to be played at the M.A Chidambaram Stadium on August 18.

For each match win, the team will receive 2 points while for a draw, both teams will get 1-1 points. The cricketers registered in Tamil Nadu are only eligible for the tournament.

In the TPNL 2019, total 31 matches will be played in the inaugural edition of the tournament. The games will be played at 3 different venues. Chennai will host the opening match as well as the semi-finals and the final.

Star Sports network is the official broadcaster of the Tamil Nadu Premier League 2019 and they will have live tv coverage and online streaming on its website and app (Hotstar).