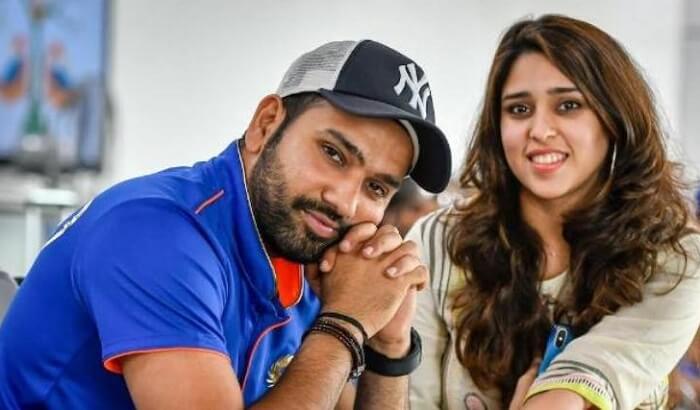 Cricketer Rohit Sharma’s wife Ritika Sajdeh: All We Know About Her

Rohit Sharma is the current opener for the Indian national cricket team across all formats. He is also the captain of 5 fives times IPL champion Mumbai Indians. When Rohit Sharma scored his first double century in ODI, he dedicated it to his wife, Ritika Sajdeh.

Let’s have a look at who is Rohit Sharma’s wife, Ritika Sajdeh? How did the couple meet and their daughter?

Ritika Sajdeh is a sports manager by profession and was born on 21 December 1987. The beautiful woman took care of the athletes and their brand approvals and contracts till she fell in love with Rohit Sharma.

She has managed Cornerstone Sport & Entertainment sports activities, the firm controlled since its founding by her first cousin Bunty Sachdeva. When it was founded, she was the first person who joined the firm.

Since then, she has worked there and has been part of the firm. In her initial encounter, her cousin, who knew Rohit 10 years before her marriage, helped. Bunty has left her to decide how she will combine her job and her household now that she is married.

Ritika is currently the manager of her spouse. The net value of Ritika has estimated at around Rs 15 crore.

READ: Who is Virat Kohli’s Daughter? All We Know About Virushka Kid, Vamika

Ritika is said to be the Rakhi sister to cricketer Yuvraj Singh. During an ad shoot, Rohit met Ritika. Initially, Rohit didn’t like her; subsequently, the duo became better acquainted, and after a time, the two began dating.

The couple dated for six years before Rohit went down on one knee for a big proposal. He drove her to Mumbai’s Borivali Sports Club, where he first began his cricket career and asked her to be his wife. Where she said “Yes”.

Since both of them have a wide network of friends and links, they had a big list of significant guests present at their wedding who were renowned figures from sports, Bollywood, politicians and businesses.

The Ambanis organised a reception to congratulate them on their journey of life both for Rohit Sharma and his buddy Harbhajan Singh who was just married. This celebration took place in the house of Ambani in Mumbai, Antilla.

Ritika Sharma is currently managing Rohit Sharma finances and works as a manager for Rohit Sharma.

Ritika Sajdeh and Rohit Sharma welcomed a lovely daughter, Samaira Sharma, into their lives on 30 December 2018 after three years of marriage. Rohit has shared with his fans his first sight of his daughter on Instagram.