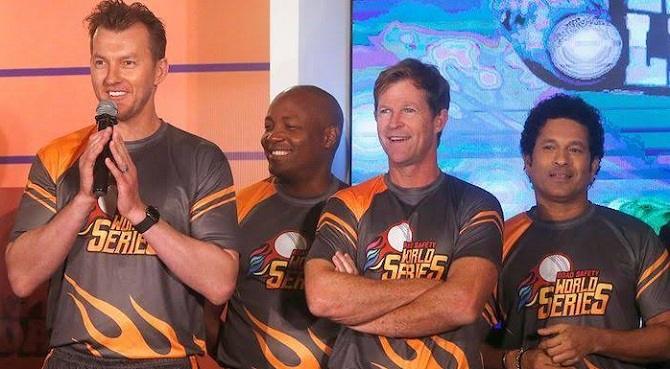 Sachin Tendulkar, Virender Sehwag, Brian Lara and Bret Lee are some of the legends that are participating in the Road Safety World Series. The T20 cricket tournament has been rescheduled to take place from 5 to 21 March 2022. The first season was called off after four games due to COVID-19 pandemic. Voot and Jio TV are providing the Road Safety World Series 2022 live stream online.

The league is featuring a list of cricket legends of the past who have proved their mantle in the game. Unacademy Road Safety World Series 2022 aims to promote road safety throughout the world.

The Professional Management Group and the Road Safety Department of the Maharashtra government are organizing the league that feature five teams and a total of 11 matches to be played. Each team will play once against each other to reach the final. Fans can buy Road Safety World Series tickets from BookMyShow.

The new time table of Road Safety World Series announced after it was suspended due to coronavirus pandemic. The league will kick off on March 5 and will conclude with the final game on March 21, 2022.

All matches of Unacademy Road Safety World Series 2022 will be played at Shaheed Veer Narayan Singh International Cricket Stadium in Raipur which has a capacity of 65,000.

Brett Lee – The Warlock Of The Genuine Fast Bowling

Top 5 Greatest Batsmen of All Time In Cricket History

This day That year: Virender Sehwag and Rahul Dravid have…

The tournament will feature a total of five teams. The Professional Management Group and the Road Safety Cell of the Maharashtra Government are the organizers of the tournament. The Road Safety World Series 2022 teams that will be participating in the competition are:

A total of 110 retired cricket players have agreed to participate in the tournament till date. The five captains of the five teams were present at the mega launch event of the tournament at Mumbai. Sachin Tendulkar will represent Indian Legends. Brian Lara will lead the West Indies Legends.

Brett Lee will captain the Australian Legends side. Jonty Rhodes will be the leader of the South African Legends, and Tillakaratne Dilshan will represent the Sri Lanka Legends. Apart from the five captains, Virender Sehwag and Sunil Gavaskar were also present at the launch event. They will be the commissioner of the league.

The Indian team will also feature Sehwag, Zaheer Khan, RP Singh, and Ajit Agarkar. Jacques Kallis is expected to play for South Africa while Muttiah Muralitharan is also expected to be a part of the competition.

Viacom 18 is the official broadcasting partner of the tournament. Colors Cineplex and Colors Kannada Cinema will broadcast all the games of the tournament while the Road Safety World Series live streaming is available on the Voot’s and Jio TV’s official website and app.

All the matches will live telecast on COLORS Cineplex, COLORS Kannada Cinema, Rishtey Cineplex and live streaming on VOOT and Jio.

Cricket fans can now buy Road Safety World Series tickets online from the BookMyShow. The price of tickets are based on the seating stand of the stadiums.

If you want to buy the India Legends vs West Indies Legends cricket match at Veer Narayan Singh International Cricket Stadium in Raipur then you have to pay ₹250 to ₹500 while India Legends vs Sri Lanka Legends T20 match ticket prices are between ₹100 to ₹300.