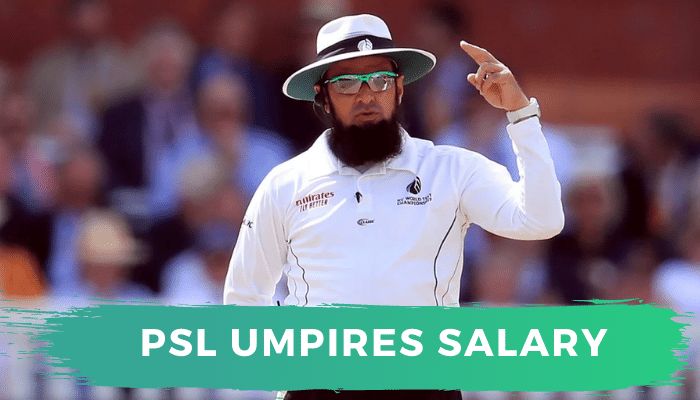 Pakistan Super League has come a long way. Since its inception in 2015. It has become one of the alluring cricket tournaments around the world. Since it is a franchise-based league, a huge amount of money is involved in it. Along with players, umpires also earn a fat amount of money. With the commencement of the 2022 Pakistan Super League, PCB revealed the reports on PSL 2022 umpires salaries per match as well as a base salary.

In the inaugural season, only 7 umpires were there. The number increased to 8 in the second and third season. In 2016 TMS Sportz revealed Pakistan Super League umpires salary for the very first time.

As per the reports in the first season umpires were earning $500 per match. The amount hiked to $1000 per match in the 2017 season. Earlier both professional and development umpires were hired for Pakistan Super League. But now only professional referees are chosen. The salary of umpires significantly increased after they started wearing sponsored shirts during the matches.

The ratio of Pakistani umpires has increased in the Pakistan Super League over a period of time. PSL provides the umpires with the perfect platform to gain experience and increase their knowledge of the game. If things go like this then in future we might see Pakistani umpires in the International Cricket Council Umpire Panel.

The worldwide spread of Covid-19 affected sports and cricket as well. As a result of this, there is not any hike in PSL umpires salary for the 2022 season. The salary is the same as of the 2022 season.

As per the report, the average payout of the umpire for the Pakistan Super League is 5 thousand dollars. The match fee of $1000 is fixed for everyone. And the base salary of $12,000 is also the same for all the PSL T20 umpires.