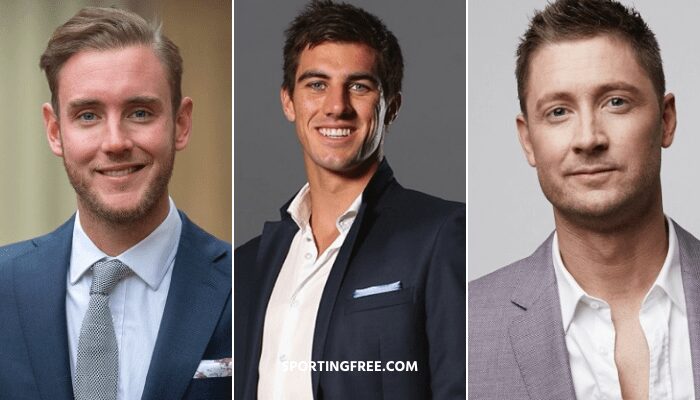 10 Most Handsome and Hottest Cricketers in the World

Cricketers are the most celebrated personalities across the world for their incredible talents and good looks. Here’s the list of the top 10 most handsome and hottest cricketers in the world.

Bond is a former Kiwi bowler, debuted for New Zealand in 2001 against Australia. For most batters, the ex-Kiwi speedster was a nightmare and spoke with his fast-paced pace and swing. At the same time, injuries cut his cricket career to an early end.

He has also been one of the most sophisticated and elegant cricketers of his time.

AB de Villiers is a former international cricketer from South Africa, played all formats and led this side. He is handsome and conventionally beautiful, yet he is widely renowned for his subtlety.

In tests and ODIs, he has been claimed several times to be the number one batsman. Abd is known for his 360 hittings, he is a match-winner and heart winner of cricket lovers.

Patrick James Cummins is the current Vice-captain of Australia. Cummins came into the spotlight with a stunning test debut, grabbing a total of 7 wickets to seal the series against South Africa on the Wanderers. His debut in the 2010-2011 season for New South Wales was very remarkable in his fellow Big Bash season.

He was offered the 2011-2012 central contract, whereby he became the youngest player to be contracted since the system was created in 1998 as a future leader in Australia’s speed attack. He’s one of the quickest fast bowlers and a destructive lower-middle odder batsman.

His appearances are similar to his bowling, and he looks quite handsome. He has even been interested in a tonne of photoshoots and is a perfect cast for a Hollywood movie in many respects.

In November 2012, Faf made his international test debut with a century and became the fourth South African to make a debut test in a century. Faf has represented South Africa across all three formats and leads the team.

Faf currently only plays the T20 format and has officially retired from ODIs and Test cricket. He is also the part of CSK squad in the IPL.

He is recognized for his sharp appearance in addition to his performance. Faf is arguably the most handsome cricketer in the world and the most cheerful.

Kevin Pietersen is certainly one of the world’s sexiest cricketers. His build, appearance, style, and elegance contribute to the appeal and shine of his own.

The batsman was a constant running scorer for England, born in South Africa, but contentious events resulted in his being out of the squad.

Pietersen retired from test cricket in 2014, ever since you often catch him on the commentary panel and pre-game match analysis.

McCullum was a crucial part of Kiwis in all the three international cricket formats and was also the captain of the New Zealand side. He has played around 350 international matches in his career. Brendon McCullum is a now mentor, analyst, and KKR’s IPL coach.

He also scored a triple century against India. The New Zealand whiz is also a very well-constructed body covered in sharp tattoos and one of the world’s most handsome players. It is considered to be a T20 specialist. You can also check our list of 10 Hottest & Most Beautiful Women Cricketers in the World.

Michael Clark is the Australian Cricket Team’s former skipper. Clark made his international debut in 2003. Clarke was also a top-rated batsman with more than 50 batting average. He is known as the most successful Aussie captain.

Stuart Broad, with his match-winning exploits in all forms, soon became a gifted quick bowler. Broad pushed his skills to a different level, particularly in trial cricket, and made him one of the world’s top cricketers. Broad is a quiet person out of the cricket field, yet he takes the stage when he dressed elegantly for any function.

Stuart Broad is one of the world’s most successful cricket makers, who still picks up the bar on the cricket field. He was always famous for his adorable appearance from a very young age.

Virat Kohli debuted internationally in 2008 and slowly became a scoring run machine for the Indian Team. Kohli leads the Indian side in all formats and set a benchmark through his fitness.

He is widely regarded as cricket greats, and we don’t think anybody can dispute him with countless archives on his name. He was also the world’s best ODI, T20, Test at certain points in his career by ICC ratings.

One of the most famous characters, well recognized for his vivacity and attractive haircuts. His looks and physique make him one of the hottest cricketers in the world. He’s renowned for his batting and fashionable talents that attract people from throughout the world.

Cook made his international debut for England in 2006 against India in test format. The former English cricketer captured many fans’ hearts due to his amazing beatings and spectacular features.

In all three forms, Cook was a part of the British national teams. Cook led the National side in both ODIs and test format.

He is probably the most handsome cricketer of the advanced period and the sixth most remarkable test ride scorer ever. Because of Cook’s looks and personality, he got enormous fame among ladies with his beautiful eyes and fascinated appearance.