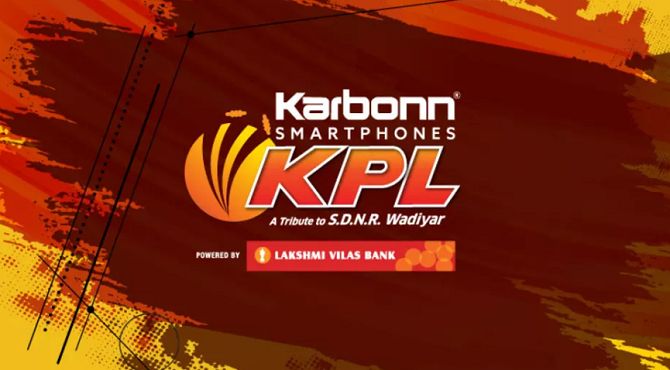 The 2019 edition of the Karnataka Premier League is taking place from August 16 and all the seven teams from Karnataka are fighting for the KPL title. The complete KPL 2019 schedule and timetable is released by the KSCA, the KPL 2019 is set to be played from 16 August to 1 September 2019. The 8th season of the popular South Indian domestic T20 cricket tournament, KPL 2019 to be held across three cities of the Karnataka state for over 19 days.

The opening match of the tournament to be played at the M. Chinnaswamy Stadium in Bengaluru. The first match of the day would start at 2 pm followed by the second match in the afternoon at 6:30 pm IST. The league will be played in three phases – Bangalore, Hubbali and Mysuru. KPL is the second most popular Indian domestic cricket leagues after the TNPL among various leagues. The confirmed KPL schedule for season 8 has announced by KSCA, the KPL T20 2019 is set to start on August 16. The league to be played in the memory of S.D.N.R Wadiyar, the former president of the KSCA.

Bijapur Bulls are the defending champions who won the title defeating Bengaluru Blasters in the final. The KPL 2019 to broadcast live on Star Sports and live streaming on Hotstar.

Total eight teams to be played in the KPL while the league’s most successful team is Bijapur Bulls who won the title twice. This domestic cricket tournament is founded on a base of the popular Indian Premier League (IPL). In the tournament, there is a league stage where top four teams qualify for the knockout stage at the end of the league stage.

The Mysuru’s leg to be played at Srikantadatta Narasimha Raja Wadiyar Ground while Bengaluru’s leg at the Chinnaswamy Stadium and Hubli’s at the KSCA Hubli Cricket Ground.

Here are the participating teams in the KPL 2019:

All the latest news of KPL 2019 schedule, teams and fixtures will be available here, so stay with us.