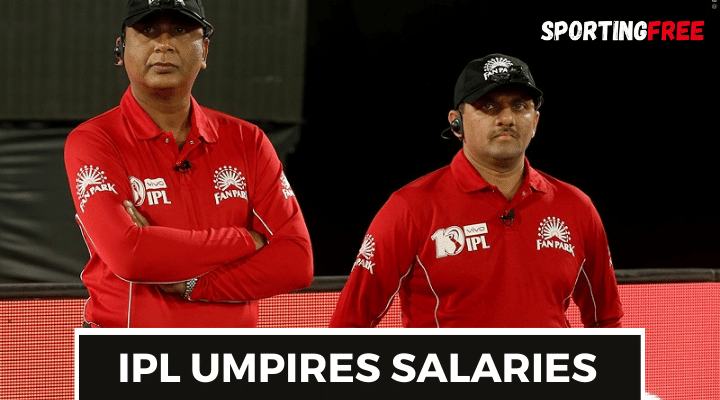 The Indian cricket board revealed the match fees and IPL umpires salaries for the 2022 season which is set to begin on April 9. They are responsible for the smooth conduction of cricket matches but unfortunately, umpires do not get much appreciation as they suppose to get. With the increase in sponsor for the current season, IPL 2022 umpires salaries are likely to increase

The 14th edition of the Indian Premier League (IPL) is scheduled to be played in India. Last year’s IPL had to be shifted to UAE considering the safety of the players due to the ongoing pandemic. With nearly 7 months of no cricketing action, the most awaited T20 megaevent was back.

The current edition commences on 9 April 2022 and the finals will be played on 30th May. As per the local rules, all the matches will be played behind closed doors. Even the teams and all the players have to follow the COVID norms and stay within the Bio Bubble.

To host the biggest club level cricketing event amidst the pandemic is no joke. Credit goes to BCCI to get the tournament going, players for respecting the tuff quarantine period and bringing delight to the millions watching them.

Though one department which goes uncredited is the IPL umpires. Without them, the tournament would never have been made possible. They too went through COVID tests, quarantine period but are unspoken of.

The list of Umpires officiating the Indian Premier League (IPL) 2022 are as follows:

IPL Umpires this year are sponsored by PayTm and each umpire will receive sponsorship money of ₹ 7,33,00 after the end of the edition.

Nitin Menon is the 4th Indian to be included in ICC’s elite panel along with Richard Illingworth, Paul Reiffel, and Christopher Gaffaney. However, the rest of the umpires are from BCCI’s elite panel.