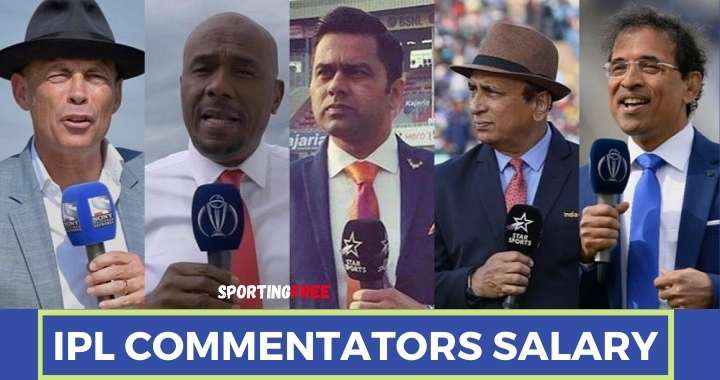 The flagship T20 league of the year, IPL 2022 is back with a bang. The star-studded tournament this year is not just limited to the field, but also in the commentary box. IPL released a list of their elite panel of experienced commentators for IPL 2022 edition. BCCI recently revealed the IPL commentators salaries for 2022 season to lend their voice and analysis for the game.

IPL is an Indian League but its reach is global and is broadcasted among 120 countries worldwide. With fans unable to reach out to support their teams and add the magic to their game, the task is now on the commentator’s shoulder or precisely their voices to add the due flavour to the game.

A tournament of this stature requires experienced and skilled presenters of the game. IPL from their side has given huge attention to the importance of good commentators for the league and make sure that they are rewarded impressively for their work.

But do you know who all made it to the elite panel of IPL commentators this season? Who’s debuting and which are the big names missing this year? And who are the highest-paid IPL commentators in 2022?

IPL has divided its category of Commentators into 3 parts due to the multilingual audiences. which are English panel, Hindi panel, and Dugout.

While there are 3 categories of commentators presenting the matches to the viewers, the range of salary being offered varies as per different medium of language.

The big-name that is missing from the list is Sanjay Mangrekar who has been dropped by BCCI from his contract. While Former South African batsman JP Duminy makes his second debut in IPL, this time in Commentary.

Anjum Chopra and Lisa Sthalekar are the only two women commentator in IPL this year and both will receive a sum of $250,000 each.

Aakash Chopra with his unique commentary skills has received the highest contract from IPL. He will be earning close to 6 lakh rupees per game.

IPL has not released the salary of the analyst sitting in the dugout studio in Mumbai. However, Dugout commentary panel are paid between $500,000 to $700,000.

IPL, however, saw one tragic event as Former Australian batsman Dean Jones passed away in Mumbai. Thus Sanjay Banger from the Hindi panel was roped in to fill in the void.

IPL is the biggest T20 cricket league in the world which also reflects in IPL players, commentators as well as umpires salary. Also, the Indian Premier League pay comparably high salary to commentators than PSL and other cricket leagues.