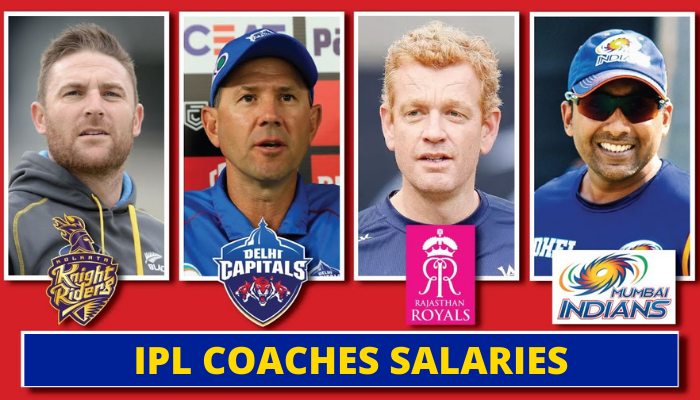 IPL Coaches Salaries 2023: How Much Do IPL Head Coaches get Paid?

The Indian Premier League (IPL) is one of the biggest sporting events in the world. The league involves a huge amount of money. The players along with support staff earn a handsome amount of money from the league. The IPL player’s salary is known by everyone, but in this article, we will talk about the IPL coaches salaries. How much do IPL head coaches get paid?

The lowest-paid head coach in IPL 2023 is Mumbai Indian’s Mahela Jayawardene and Sunrisers Hyderabad’s Trevor Bayliss. As per their IPL contract for the current season, both coaches get paid 2.25 crores per season.

IPL 2023: Salaries Of All The Coaches

The head coach of the Chennai Super Kings side is New Zealand international Stephen Fleming. He earns $476,680 or 3.4 crore from one season of the IPL.

Another New Zealand international Bredon McCullum, head coach of Kolkata Knight Riders every season gets 3.4 crores or $476,680 from the franchise.

Andrew McDonald is the IPL head coach of the Rajasthan Royals team, he gets paid Rs. 3.4 crores per season for managing the team in the Indian Premier League.

In total, the salary of the IPL head coaches is bifurcated into three broad categories. The categories are made according to the salary slab. The first salary slab is Rs. 2.25 crores, second is Rs. 3.4 crores and the last is Rs. 4 crores.