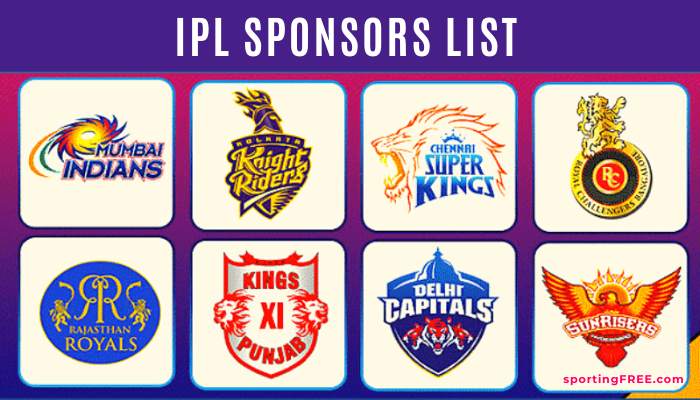 Here’s the list of Indian Premier League (IPL) 2022 sponsors and partners along with every IPL team title sponsors.

The 14th season of the Indian Premier League (IPL) is all to begin from 9th April 2022. With teams are gearing up, many brands have come up as associate sponsors ahead of IPL season. The brand such as Upstox, Vimal Elaichi, PhonePe, Unacademy, AMFI, Livspace, Pharmeasy, Swiggy, and Parle Agro have roped with the IPL 2022. IPL is back in India after the last season was played in UAE because of Covid-19.

According to the reports by Duff & Phelps, the IPL brand value increase to $6.8 billion which truly reflects in the growth of IPL 2022 sponsors.

BCCI has made a big decision and announced Vivo as IPL title sponsor for the upcoming season. Last season, Dream11 took the place of Vivo as the official title sponsor of IPL. With Vivo back here we look at the official IPL sponsors and partners for the 2022 season.

After an year hiatus Vivo is back as the title sponsor of IPL. Last season IPL roped in Dream11 as title sponsor for 224 crores. But Dream11 could not retain the title this season. This amount involved in the deal between IPL and Vivo is not disclosed yet.

BCCI signed Unacademy as the official sponsor of IPL Last season and signed a three years contract with it. Unacademy is a digital educational platform. It was formed in 2015. As a part of the deal, Unacademy will pay Rs.120-130 crores to BCCI.

Another name in IPL’s official partners list is Cred. Cred also signed a three years partnership with BCCI last year. It is an online credit card payment app with its head offfice in Bangalore. As per sources, the deal was signed for Rs.120 crores.

This will be four consecutive years of partnership between IPL and Tata. Every year the player will highest strike rate gets a Tata Car. In the upcoming season also the most destructive player will get a Tata car.

Upstox becomes the latest addition in the list of IPL 2022 official Sponsors list. Upstox is a pipeline doctoral stockbreaking firm backed by Ratan Tata. The deal is estimated to be signed for 90 crores.

Before the 2019 season, BCCI signed a Rs. 28 crores deal with Paytm and roped in as it’s Umpire’s sponsor for the next five seasons. As a part of time, Umpire’s jersey will have Paytm print on it.

After losing the title sponsorship Dream11 managed to retain its old spot as the offical fantasy Partners of one of the biggest sporting events in the world.

he 2022 edition of the Indian Premier League (IPL), Chennai Super Kings (CSK) have found themselves in a bit of strife. To start with, Muthoot, their long-term jersey partner, didn’t renew their contract with MS Dhoni and Co. Now as per reports, Skoda, the renowned Czech car company, has backed out from the sponsorship deal with the three-time IPL champions.

Every IPL team has announced their sponsors and partnership with the brands for the 2022 edition of the Indian Premier League (IPL). The brand deals mostly depends on the team’s performance and star players.

Mumbai Indians has signed DHL Express as the official logistics partner for IPL 2022. The international logistic brand, DHL Express is the new Principal Sponsor of the MI team and its the first-ever cricket deal by the company.

CSK title sponsor Muthoot is not in the mood to renew their contract and it is said that that the popular online fashion company, Myntra is all set to replace for a deal worth INR 25 crores as a title sponsor.