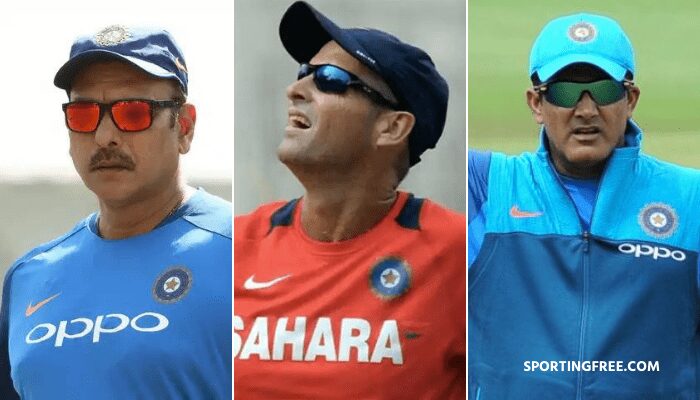 Indian Cricket Coach Salary History: List of All Coaches and their Salaries

The BCCI has experimented gradually over the years with Indian as well as international coaches, and currently, former cricketer Ravi Shastri has been appointed as the head coach.

Chapell was appointed the head coach for the Indian cricket team from 2005 to 2007. BCCI paid him a total of 1.25 crores per year as his payment. The Aussie drew much criticism over the two-year campaign.

Greg Chappell’s nomination as the Indian head coach in 2005 was expected to bring much success as he was believed to be one of the finest batters of his age and a Master Game Tactician.

However, under Grey Chapell, India was eliminated in the group stages of the ODI World Cup in 2007 by Bangladesh.

The veteran South African is considered to be the most successful coach of the Indian squad. BCCI paid him 2.5cr per year, which is 101.6% more than former coach Chappell. India won the 2011 World Cup under Garry Kirsten’s coaching, which came after 28 years of long Indian struggle.

Easily, Gary Kirsten is India’s most successful coach in its history (2007-11) as he leads team India has reached several heights with a rating in the No.1 Test Ranking 2009 and the 2011 homeworld cup triumph, headed by the MS Dhoni and Gary Kirsten leadership combo.

From the season of 2011 to 2015, BCCI appointed Duncan Fletcher, the former Zimbabwean cricketer, as the head coach. While the opponents believed him to be very dormant and forceful, he was a cool and calculated guy.

At a time when Indian cricket was set to undergo reconstruction, Duncan Fletcher took over the reins of the squad. His season began on a dreadful note, with both England and Australia being whitewashed by India.

The ex-Indian skipper was quite successful in his 12-month season as a coach with the Indian squad from 2016-17. He laid the groundwork for improving the companionship of the athletes.

The inaugural coaching series of Kumble occurred in July against West India in four-match series, with India winning by 2-0. India also overcame many test series after that. Beating New Zealand by 3–0, England by 4-0 in the 5-Test Series and Bangladesh came in India’s fourth consecutive series victory.

India continued to dominate on test format as holding the unbeatable record in tests 19 matches. However, his career as a coach fell short when he resigned the following season after a dispute with the Indian captain Virat Kohli.

Ravi Shastri is the current Indian coach appointed by BCCI after the retreat of Anil Kumble. In the first year of his contract in 2017-19, Shastri earned the salary of 8 crores annually begin as an Indian cricket coach. However, his salary spiked after the renewal of his contract to Rs 10 Crores.

The Indian team might not have won any World Cup or any major trophy under the Shastri’s venture but significantly achieved potential. For the first time, India beat Austria twice at home in a test series.

In 2019 India reached the semis where they lost against New Zealand, and in 2023, India breached Gabba for the first time in history and reached the finals of the World test Championship, all this under Virat and Shastri’s era.