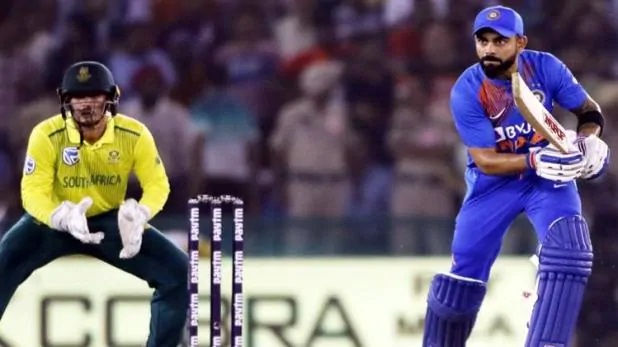 India vs South Africa 3rd T20 Prediction and Dream 11 Team: India will look to seal the series when they take on South Africa in the 3rd match of the 3-match T20I series.

The Indian National Cricket Team has finally started their long home campaign with a win over South Africa in the 2nd T20I of the 3 match series. After the 1st game of the series was washed away, India played a great game in the 2nd game. Team India was dominant in all the aspects of the game and defeated the Proteas by 7 wickets. Captain Virat Kohli bagged the man of the match with brilliant innings of 72 runs.

Batting first, South Africa put up a total of 149/5 in their 20 overs. Captain Quinton de Kock scored a blistering half-century before he was brilliantly caught by Kohli at mid-on. Debutant Temba Bavuma also showed his potential with 49 run innings. The Indian chase was pretty smooth. Though Rohit Sharma got out early, Kohli and Shikhar Dhawan steadied the innings and brought India closer to the target. David Miller took a splendid catch at long-on to dismiss Dhawan on the verge of his half-century. Captain Kohli played till the end and made sure that team India began the series in winning ways. Below we will see the match prediction for India vs South Africa 3rd T20 Match.

Navdeep Saini proved to be a costly affair in the 2nd T20I. He clinched only one wicket. Khaleel Ahmed could be a part of the Playing XI in the final game of the series. Apart from him, all others played decently well.

Debutant Temba Bavuma played a brilliant knock and is likely to start in the next match too. Beuran Hendricks could be a part of the squad and a couple of bowlers could exit the Playing XI because of the poor show in the 2nd T20.

India was dominant in all aspects of the game and portrayed an all-round performance. This shows that India might clinch the series 2-0. South Africa will have to be at its brilliant best to beat the Indians.