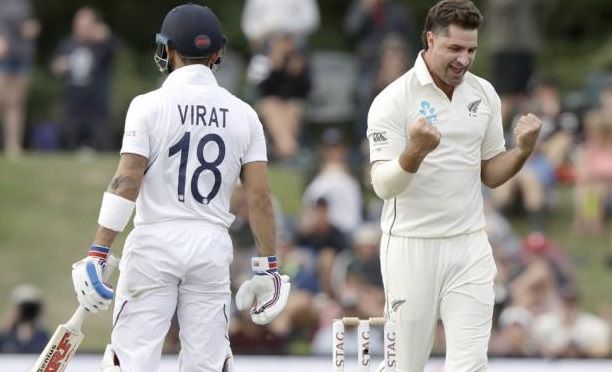 India will play the ICC World Test Championship Final 2023 against New Zealand on June 18, 2023. As the number one Test team, India finished on the top of the table after a modification in the scoring system due to the Covid 19 pandemic, with 72.2 percentage points in the point table.

Only one match taking place, below, we’ll go through everything you need to know about the India vs New Zealand WTC Final schedule including date, time, venue and team squad.

There was speculation that if India vs New Zealand resulted at a draw or tie, who would be the winner. Before WTC’s beginning in 2018, ICC indicated that the trophy would be shared if a draw or a tie ended and maintained the same position in its recent media announcement.

Virat Kohli will lead a formidable Indian team, including Rohit Sharma, Ravindra Jadeja, R Ashwin, Ishant Sharma and, to mention Jasprit Bumrah and a few more. While Prithvi Shaw had been overlooked and Hardik Pandya was removed from the side.

The New Zealand team will be lead by Kane Williamson. The selectors gave Rachin Ravindra, a native of India, a callup. He also played for the New Zealand A side.

India vs New Zealand WTC Final schedule is taking place in Southampton at Rose Bowl stadium also called as Ageas Bowl from June 18 to 22. The venue has the capacity to hold 6,500 spectators (20,000 with temporary seating). After the final between India and New Zealand, Sri Lanka vs England 2023 match is also scheduled at the venue.

How to Watch India vs New Zealand WTC Final?

The final World Test Championship match will be broadcast live on the Star Sports Network in six languages. Cricket fans can also view WTC IND vs NZ live streaming on the Hotstar app and website through the VIP or Premium subscription.

If their final encounter in Southampton results in a tie, India and New Zealand would be recognised as the joint winners.

The ICC also has a Reserve Day to make up for any time missed on normal Final Days planned for the 18th to 22nd of June, and the reserve is planned on 23rd of June.

How is Southampton pitch for the WTC Test match?

It is expected to swing in the first two days on the Southamthan pitch and on the last day batsman can expect spin on the wicket.

England normally gets considerable rainfall in June and the beginning of the summer. Therefore we may see a lot of game delays within five days of the India vs New Zealand WTC final and that is why reserve day is critical to achieving success.