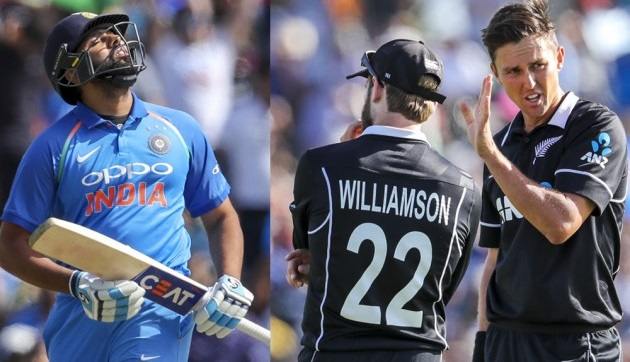 The good innings from Colin Munro, Kane Williamson and Ross Taylor helped New Zealand to put a target of 203 for five wickets against India. The Indian top-order showed their power with Virat and Shreyas scored the half-century and India case the target with 6 wickets remaining in hand. Shreyas Iyer remains unbeaten on 58 off 29 deliveries along with Manish Pandey who added 14 of his own from the other end.

SIX! Shreyas Iyer has decided to finish this in a hurry and has gone over cow corner again against Southee and it’s gone a fair few rows back. India have completed the win with an over to go.

50! Shreyas Iyer has hammered Southee straight back over his head to start the over off with a massive six and then followed that up with a cheeky flick to square leg to bring up his half-century in quick time.

Bennett has come back well in the over and bowled with fire. Just the three singles of the final four deliveries keeps the game in the balance. India need 18 from the final 2 overs

Four and Four! Bennett bowls into the body of Shreyas Iyer and he has helped him along to fine leg first and then through cow corner for two important boundaries. India back on top!

Southee bounces back well in the over and keeps Shreyas Iyer and Manish Pandey from finding the boundaries after that six. India take 10 runs of the over and need 29 from 3 overs.

SIX! Short and not with a lot of pace from Southee and Iyer has picked him off over long leg for a maximum! Good start to the over.

SIX! Sodhi bowls it short again and this time Manish Pandey has clubbed it over cow corner for a maximum! Important over for India as they move onto 165/4 after 16 overs.

Four! Sodhi gives Iyer width and pitched it short outside the off stump and he’s cut it away ferociously for a boundary.

A good over by Bennett as he concedes seven runs. Shreyas Iyer and Manish Pandey nudge him around the wheel to keep the runs coming. India need 53 from the final 5 overs.

Superb over from Ish Sodhi. Picks up an important wicket and keeps the batsmen from moving the scoreboard along. Two runs and a wicket takes India to 144/4 after 14 overs.

OUT! Dube’s gone looking for yet another big hit against the spinner and this time the connection isn’t good enough. Southee’s safe hands takes another catch as India lose their fourth.

Big over for India against Santner as they make it 13 run one. Shivam Dube goes after the spinner and whacks him for a boundary and a six as Santner puts it in the arc for the southpaw. India are 142/3 after 13.

8 from Tickner’s over keeps India moving along at a good rate but having lost the set pair of Kohli and Rahul, it is up to Shreyas Iyer and Shivam Dube now. India are 129/3 after 12 .

Four! Shreyas Iyer makes room on the leg side and flays it over extra cover for a four. He’s got Shivam Dube at the other end after Kohli’s dismissal.

OUT! A wonderful catch from Martin Guptill in the deep. Dives forward to catch a mishit from Virat Kohli. Tickner has his wicket as New Zealand start to claw back. India are 123/3.

A quiet over for Santner and New Zealand after a while as he concedes five singles and a wide too. India with Kohli and Shreyas Iyer are looking to keep the momentum going with the score reading 121/2 after 11 overs.

OUT! Crucial wicket for the Kiwis and for Ish Sodhi after a terrible over. Tosses it up and Rahul looks to go for a big one again and ends up holing out to Southee who has taken a good catch running in. Rahul goes for 56 and India are 115/2 after 10 overs.

The pressure is telling on Tickner as he has a long over and concedes 16 runs. A wide bouncer and a front foot no-ball does not help his cause either. India are cruising along at 107/1 after 9 overs.

Half-century! KL Rahul on strike off a free-hit and he has hammered it over long on into the crowd to bring up his half-century! Superb batting from a man in from. 100 up for India too.

CHANCE! Tickner has got the edge of Kohli’s bat as he looks for a big hit and Ish Sodhi can’t catch the skier.

Four and Six! Santner has taken a hammering over here. Driven over his head for a boundary first and then whacked in the same region for a maximum right after by KL Rahul. Kohli approves from the non-striker’s end. India make that a 14 run over and  move on to 91/1 after 8.

Slightly wayward over from Ish Sodhi as he comes on in place of Southee. Couple of wides and a bunch of singles and a smashing pull shot by Kohli for a boundary make that a 12 run over. Kohli looked to go for the big hit of the last delivery as well and is unhappy about the connection. India move on to 77/1 after 7 overs.

8 runs from the Hamish Bennett over takes India to 65/1 after 6 overs, but it could have been a very different situation if the Kiwis had fielded well.

Four! Short and into Kohli’s body and he moves away and slaps it away through midwicket. There was a fielder in the deep but that was hit like a rocket. Bennett can only look on.

CHANCE! New Zealand had two chances to run out either Kohli or Rahul and they have missed them both due to sloppy fielding. That could be very very costly.

Southee’s over’s been rather expensive for the Kiwis as KL Rahul and Kohli take 16 runs of the over. Rahul doing the most damage with a six and four at the end after the duo had managed an unlikely 3 earlier in the over. India cruising along at 57/1 after 5 overs.

SIX! Whipped away in style by KL Rahul! Southee’s bowled a decent delivery and Rahul’s has picked it up and sent it into the crowd over square leg. He really has hit a purple patch recently!

Another 10 run over for India but Tickner bounced back well and cranked up the pace after the first delivery. Beat Kohli’s edge too. India have moved on to 41/1 after 4 overs.

SIX! Blair Tickner with a slower ball to start off with to Kohli and the Indian captain has obliged with a magnificient hit back over his head for a maximum!

10 runs of the Hamish Bennett’s over with 9 of them going Kohli’s way including a sweetly struck boundary. Rahul chipped in with a single too as Bennett attacked the stumps. India are 31/1 after 3 overs.

Four! It’s Virat Kohli vs Hamish Bennett time and Kohli has carted him over mid on for a boundary of the second delivery of the over.

That is a very eventful over from Santner. He’s conceded 17 runs with KL Rahul pulling him away for a boundary of the last delivery. He’s got Virat Kohli for company now and India are 21/1 after 2 overs.

OUT! That’s a huge wicket for New Zealand of the very next delivery. Rohit looks to go big again and the edge lands up safely in Ross Taylor’s hands at point.

SIX! Now it is Rohit Sharma’s turn. It’s in the zone and he’s cleared the long on fence with absolute ease!

Four! Mitch Santner tosses it up and KL Rahul has driven it through mid off and extra cover for the first boundary of the innings.

Tim Southee bowls an excellent first over with some probing lines and lengths towards the end. India take four runs of that over and both batsmen are off the mark too. No boundaries yet.

We are back for the second innings of the contest at Eden Park. Rohit Sharma and KL Rahul will look to give India a good start to this chase of 203.

So that’s end of the innings and New Zealand will be mighty impressed after putting 203/5 on the board. An excellent effort here by the Kiwis.

Bumrah comes on for the last over. The bowler seems to have twisted his ankle in his follow-through. He is on the ground and getting some medical attention. But seems fine now.

OUT: Bumrah has a wicket here. Seifert tries to take the aerial route and is caught at the boundary by Shreyas Iyer. Kiwis are 181/5.

OUT: And suddenly the tempo has shifted. Both these batsmen are scoring runs quickly. This is not looking good for India ar the moment. Also Williamson gets to his fifty in 25 balls. But also falls on the very next ball. He gives a simple to Kohli. Kiwis are 178/4.

SIX: The run rate has come down marginally for the Kiwis. Either Taylor or Williamson need to go for their shots now. And Taylor hits Jadeja for a massive six. After 15 overs New Zealand are 143/3.

OUT: Wickets falling in quick succession here. Jadeja comes into the attack and has the wicket of de Grandhomme. Dube takes a simple catch. It’s 117/3.

OUT: Munro departs for 59. Thakur has him caught in the deep. A good innings comes to an end and the Indian bowlers can heave a sigh of relief. It’s 116/2 now.

FIFTY FOR MUNRO: And a cut by Munro brings up yet another fifty for him. He has been going great guns, and Kiwis would definitely be looking at a score over 200. It’s 97/1.

SIX: The run rate has come down a bit after Munro’s departure. If India can get in another wicket here, they’ll be able to comeback in the match. Meanwhile, Williamson hits his first six of the match. New Zealand are 91/1 in 10 overs.

OUT: And Shivam Dube has a wicket here. Guptill goes for a pull and Rohit manages to pull off a stunner at the boundary. India are back in the match as Guptill departs for 30. It’s 80/1.

Chahal comes into the attack now and he needs to get a wicket for India here. Munro misses one and the ball is tantalisingly close to hitting the off stump. A good over comes to an end as Kiwis are 73/0 after 7 overs.

Shami comes back for another over, and the partnership continues to flourish. Indians haven’t gotten their lines right as yet. New Zealand are already 58/0 in 5.3 overs.

A change in the bowling already as Shami comes into the attack now. But the results don’t seem to be changing as Munro pulls for another four. Kiwis are 26/0 after 3 overs.

SIX, FOUR: Shardul Thakur comes to bowl the second over. And Guptill gets a four just on the second ball of the over. In the same over, Munro gets underneath the ball and gets a big six. New Zealand are 19/0 after 2 overs.

Martin Guptill and Colin Munro make way to the middle. Bumrah has the new ball in his hand. And he starts with an excellent ball outside the off stump. Seven runs come from the over. It’s 7/0.