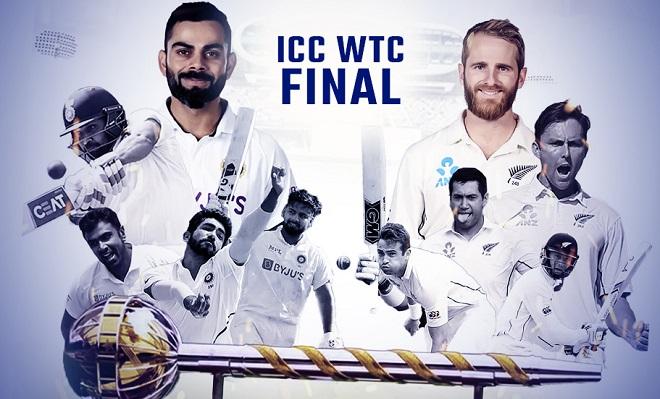 ICC World Test Championship Final 2022 is going in favour of draw as India and New Zealand can now play only 196 overs that include the reserve day to determine the winner. If it happens, the WTC title will have joint winners and prize money will be split between both the teams. But still, there is little hope of the verdict, make sure you tune in to watch India vs New Zealand live streaming WTC Final 2022 Match Day 5.

The world is witnessing the thrilling battle between India and New Zealand for the ICC World Test Championship 2022, which begins on June 18. Star Sports to live telecast WTC final 2022 match on TV while Hotstar has exclusive online rights of India vs New Zealand live streaming in India.

The ICC World Test Championship final 2022 plays from June 18 to 22 at the Rose Bowl Stadium, Southampton. Earlier, the Lords has decided the venue of the finals. But, after considering the safety of the players the match got shifted to Southampton.

India finished the group stage as table toppers with 520 points. On the other hand, 2nd placed New Zealand qualified for the finals with 420 points in the group stage. During their course to the final both, teams lost 4 matches. The match is going to be historical, so make sure you know how to watch ICC World Test Championship final live streaming free.

Star Sports Networks is broadcasting the match in the Indian subcontinent. Fans in India can also watch the ICC World Test Championship final live streaming between India vs New Zealand on the Disney+Hotstar app and its official website using browser. Although, one needs a subscription to the Disney+Hotstar app to watch the action live on mobile phones, laptops and tablets.

Disney+ Hostar allows users to watch the content through two subscription plans, Disney+ Hotstar VIP and Disney+ Hotstar Premium. The VIP plan is a cheaper option for someone who wants to live stream cricket in India at a cost of INR 399 per year.

The app is available for all mobile phone users including Android, iOS, Mac, Windows as well as on Smart TVs, Apple TV and Streaming services.

JIO and Airtel provide free access to the Star Sports channel via its app. Download and install the JioTV app or Airtel TV on your smartphones and watch ICC World Test Championship final IND vs NZ live cricket streaming free on your phone.

The live telecast of the ICC World Test Championship Final 2022 will be available on SKY Sports in New Zealand. Whereas, fans in Australia can watch the live-action on Channel Nine and Fox Sports.

In South Africa, the final of the ICC World Test Championship Final 2022 will be telecasted by SuperSport and SABC. Sky Sports holds the telecasting rights of the finals in the United Kingdom.