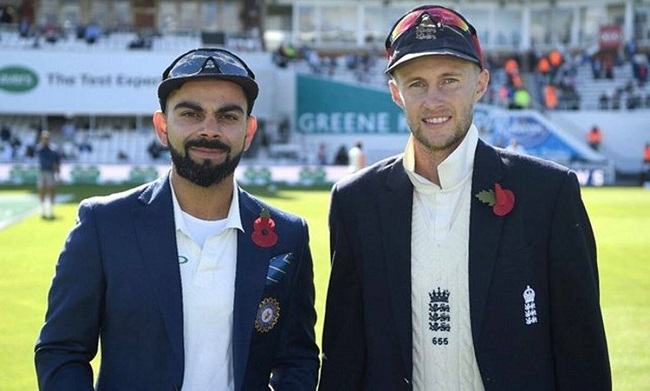 Yet another series, when England set to feature in the compact long series against hosts (India) in the 4-test, 3-ODIs and 5-T20ls which will commence  from 5th February with first test match at Chennai. Both the teams have won the previous test series against the best test playing nation where team India defeated Australia in their own territory, England team white washed Sri Lanka by 2-0 in the subcontinent.

Where team India will more likely to play with their regular players like Virat Kohli and Hardik Pandya who were not the part of full team India campaign of Australia earlier.

While England team would be confident enough with their series win against Sri Lanka, as most of young England players get used to subcontinent spin-friendly tracks before the series against India.

The England captain Joe Root has been in the red-hot form who becomes the second-fastest to arrive the 8000 test runs mark in the England cricket history and he will look to continue that form in the test series against India.

There are players like Ben stokes, Jos Butler, Rory Burns and Dom Sibley who all look make an impact in the coming series and cement their place in the team.

Possible Playing for India in the 1st Test

Let us take a look at the predicted playing XI of team India against England for a first test match.

The first opener of the team would be definitely Shubman Gill after his massive in the three test matches against Australia. Since the time of Virender Sehwag retirement, team India is looking to find the replacement of Swashbuckling Virender Sehwag and it looked they have one player who can be the dependable opener for team India in the coming decade. Shubman Gill has already received many ovations for the next best test opener.

In the 3 test and 6 innings, Shubman Gill has score 259 runs at a brilliant average of 51.80 which also include the crucial knock of 91 runs at Brisbane Gabba which helped team India to retain the border-Gavaskar Trophy.

Shubman Gill short selection technique impressed everyone the way he was hitting the short pitch balls and front foot defence against spinner made the people watch his batting on loop.

Alongside Shubman Gill, if there is another opener who look to complete the opening batsman problem then it would be Rohit Sharma without any doubt. Rohit Sharma has great numbers to back his case while playing in the subcontinent pitches.

In 14 test matches, Rohit Sharma average of 88.33 which is far better than his test career average. While in the 33 tests, Rohit score 2219 runs at an average of 46.32 which include 6 hundred and 11 half-centuries.

The most complete test player in the current team India line-up is undoubtedly the Cheteshwar Pujara, who has rescue the side many times and put them back into the driver seat.

With him, in the line-up, the dependable factor is more alongside other players. In the 81 test, Pujara score 6111 runs at a staggering average of 47.7 which feature 18 centuries and 28 half-centuries.

At last, Virat Kohli is back into the team after the paternity leave after the first test match of Australia. The captain of the current team India and one of the best batsman across the formats will look to add more surreal records under his feathers in the coming series after the previous year with no hundred.

At home, Virat Kholi has an average of 68.42 which gives the glimpse of batting class to England before the series starts.

The vice-captain Ajinkya Rahane will give enough depth this line-up after the great performance as a captain in Australia earlier. In 68 test, Rahane score 4414 runs at an average of 42.45 in his test career so far and with the kind of form he was in Australia will definitely look to repeat it again in the coming series.

Rishabh Pant has come a long way since his debut for the team, an elegant stroke maker of the ball who can play a wide range of unorthodox shots in test cricket at any time to change to course of the match.

Pant recent batting performances reveal he is a big-match player who likes to play against best teams and score runs. The wicket-keeper batsman would definitely be the first preference among others in the lot.

Very few are aware about the fact that R.Ashwin is an engineer who later has decided to play cricket. Missed the final test match of border-Gavaskar Trophy, Ashwin is all fit to feature in the first test match of the series.

Into the 30s and towards the last phase of his career, Ashwin will look to add more records under his name, as currently, he has the left-handed batsman for 192 times in test cricket (the most by any bowler). In 74 test, Ashwin has taken 377 wickets at an average of 25.54 which feature 27 five-wickets-hauls.

Recently made his test debut for team India in test, Washington Sundar would definitely be the choice of second all-rounder in the absence of Ravinder Jadeja among others in the lot.

Play for Tamil Nadu, the left-handed batsman is the handy contributed with the bat too which was witnessed in the recent series against Australia and he will look to cement his place in the team with more runs in his bag.

In the absence of Jadeja, Kuldeep Yadav is all set to replace him the upcoming series and in the subcontinent pitches the chinaman bowler look to take advantage of conditions and befuddle the batsman of opposition team with his variations. In 6 test matches, Yadav has taken 24 wickets which feature 2 five-wickets-hauls.

At present, Jasprit Bumrah is the best bowling talent team India has in the red-ball cricket. In 17 test matches, Bumrah picked up 79 wickets which include 5 five-wickets-hauls and hat trick too. Without any doubt, this pacer will be the part of playing XI in the coming series all the way.

The last but not the least Ishant Sharma will look make a comeback in the coming series and cement his place for the long time. Although there are other bowlers too but the experience factor with Ishant Sharma will back his case stronger than others.