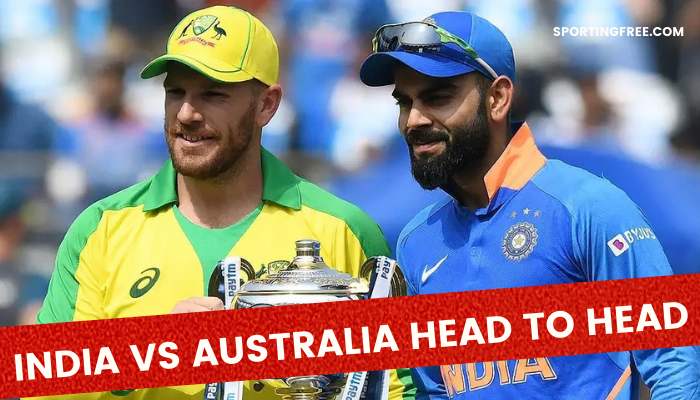 India vs Australia Head to Head Records – ODI, T20 & Test Matches. Australia has a good record in ODI head-to-head against India but struggling in T20I records.

Australia is the number 1 ranked test and T20 team in the world. Moreover, they have the most number of World Cups by any team. On the other hand, India is ranked higher than Australia in ODI’s and has the most passionate cricket fans among any nations in the world. But when it comes to both the teams facing each other do you know who has an edge over the other? Here are India vs Australia Head to Head Records in ODI, T20 & Test Matches.

To date, India and Australia played a total of 26 series against each other. Out of the 26 series played so far, Australia has dominated with 12 series wins with India only managing 9 Test series victories. There have been 5 series that have been drawn so far. The list of test series is as follows.

The first ODI match being played between these two teams was in 1980, It was won by India. However, the first bilateral ODI series was played in 1984-1985 which was won by Australia.

Again Australia emerged as the better team as they won more number of matches. Out of the 145 ODI matches played between these two nations, 78 have been won by Australia and India has managed to win only 52 games. While 10 games ended in No Result, five games were either abandoned or canceled.

India vs Australia Head to Head Records in T20

The first-ever T20 match between India and Australia was played in 2007 and it was won by India. To date, they have competed in 14 T20 series and 4 have been won by India and 2 by Australia, and more surprisingly 8 by the third team in the Trilateral series.

Australia is ranked number 1 in T20 but India has had an edge over them in India vs Australia Head to Head T20 records with 11 win in 21 matches.