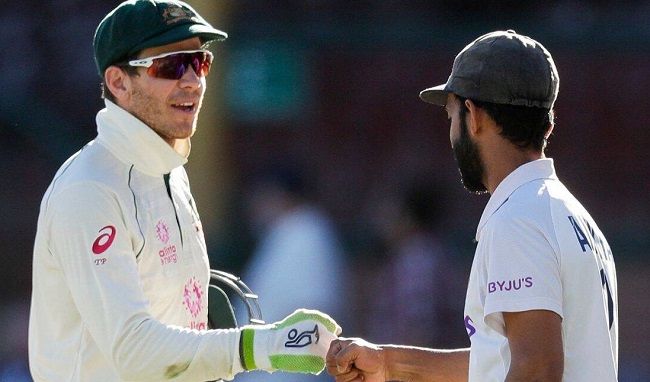 India vs Australia 4th Test Highlights: The much anticipated Border-Gavaskar Trophy have been reached towards the last phase of its tour when the visitors (India) have lock horns with hosts (Australia) in the final test match of the series.

So far in the test series it has been very much average performance from the Australia team against team India. When they are playing without the services of major players most of them are injured while captain Virat Kohli is on the paternal leave after the first test match.

The hosts are playing with new opener Marcus Harris instead of Will Pucovski who was injured in the last test match during the fielding. While team India is going to miss the services R.Ashwin and Jasprit Bumrah in the deciding game.

Australia after winning the toss has decided to bat with no surprise at Gabba where they have been unbeaten since 1988 against West Indies. Australia has played total 31 games at this venue winning 24 and able to draw 7 tests since their last major defeat at Gabba. While on the other side team India has played 6 test at Gabba and lost 5 with one test was draw.

David Warner poor forms continues who was sent back to pavilion at the score of 6 runs by Mohammad Siraj caught by Rohit Sharma. Before Australia could’ve recovered they have lost the another opener Marcus Harris to make the scoreboard look like 17 runs for the loss of 2 wickets.

The most dependable pair of Australia Steve Smith and Marnus Labuschagne was on the crease and they have started rebuilding the Australia innings. The pair added 70 runs for the 3rd wicket before debutant Washington Sundar removed Steve Smith (36) at the score of 87/3.

Read Also: How to Watch India vs Australia Live Streaming 2022

From 87/3 to 213/5, Australia has lost the momentum provided by Marnus Labuschagne and Mathew Wade 113 runs for the 4th wicket as both the wickets were removed by T Natarajan.

The two new players Cameron Green (28*) and Tim Paine (38*) were on the crease to stop further dents into the line-up and they have somewhere successful too at the end of day one at 274 runs for the loss of 5 wickets. While both are remained unbeaten with 61-run partnership for the sixth wicket.

When day two will resume at tommorow team India will looking to wrap up the Australia first innings at early as possible.

Otherwise if Australia will score over 400-plus runs in the first innings it will be difficult for team India to get back into this match when their major team India players are not playing the game.