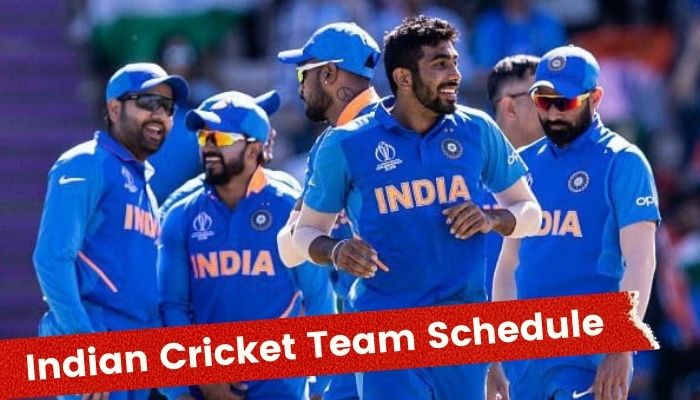 The Indian cricket team is scheduled to play non-stop cricket throughout 2022. 2020 was a disaster year for cricket fans across the world due to the coronavirus pandemic. The T20I World Cup and several series were cancelled however, things are looking exciting for 2022. Get India Cricket schedule for all upcoming T20, ODI and Test matches with date, match timings and venues.

The Virat Kohli and Co who had a good practice in every department in the IPL are all set to once again represent the tricolour and are already in Australia for Test and ODI series.

BCCI has confirmed that the team will have to go through a hectic schedule for 2022 as the team will be on a tour each month. As per India cricket schedule released, the 2022 season is goingt to be hectic because they have to respect the tours which were postponed or cancelled due to COVID and they will be now rescheduled for the 2022 calendar.

All the international matches have been resumed and here’s the team India’s next matches.

The tours which have been postponed will now be played in the year 2022, thus the list of India’s schedule for 2022 including Australia’s tour is as follows.

The year 2022 will be a jam-packed with back to back cricket series along with the Indian Premier League (IPL) 2022 and the T20 World Cup.

India will be playing against England in all the 3 formats in the upcoming India tour of England 2022. The T20I and the Test series will be held from the January to nearly the end of March, with the 3 T20Is being played first and then the 3 Test matches.

The next team to be visiting India are Sri Lanka. They will be playing 3 T20Is and 2 Test Matches against the Indian team. The series will take up the whole month of June.

The month of June to July 2022 will see India playing Asia Cup 2022 against different countries.

India’s next matches are against Zimbabwe will be beginning at the end of July. These two teams will be playing 5 T20Is and 3 ODIs matches against each other.

BCCI confirmed that they are aware that the Indian cricket team timetable would be tough for the players, but they will make sure that the players get an ample amount of rest and there will be rotation policies in place as they now have a bigger pool of Talents.