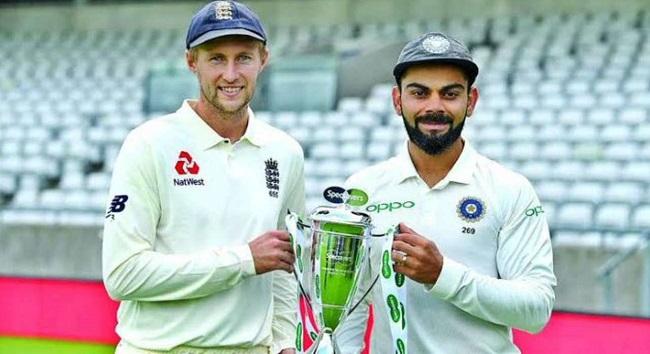 IND vs ENG LIVE 2022 Series: When and where to watch India vs England live match online

The India vs England 2022 ODI series is all set to begin and fans are not allowed inside the stadium. But don’t worry because Star Sports holds the broadcasting rights and you can enjoy India vs England live matches on Star Sports Channels and IND vs ENG live streaming on Disney Plus Hotstar.

After winning the Test and T20 series, India is taking on England in the 3-match ODI series at the Maharashtra Cricket Association Stadium, Pune on March 23 from 1.20 PM onwards. This is the first tour for the Indian cricket team at home since Covid-19 outbreak in March. England tour of India 2022 is a full-fledged tour featuring four Tests, three ODIs, and five T20Is.

The Test series scheduled to play between India versus England is part of the ICC World Test Championship series. The first two tests are set to be played from February 5 and February 13 in Chennai followed by 3rd and 4th Test at the Sardar Patel Stadium, Ahmedabad from February 24 and March 4 respectively.

The five T20 Internationals are scheduled to take place from March 12 in Ahmedabad. Later, the teams will travel to Pune’s Maharashtra Cricket Association Stadium to play the three-match ODI series which part of ICC Cricket World Cup Super League.

BCCI is expected to allow fans in stadiums after consulting the government. Even if fans wouldn’t be allowed inside the stadium still they can catch all the action of India vs England series live telecast on Star Sports Channels.

Apart from the TV channels, all of the matches will be streamed live on the Disney+ Hotstar. To watch IND vs ENG live streaming cricket match, the users will need Disney+ Hotstar VIP or Premium subscription plan.

You can download Disney+ Hotstar from app store which is available for Android, iOS, iPadOS, Android TV and Apple TV users as well as web users.

How to Watch India vs England live match in the UK?

Sky Sports to broadcast England tour of India 2022 live cricket in UK & Ireland while the streaming of the games can be watched via Hotstar.

How to Watch India vs England live match in the USA & Canada?

Cricket viewers in the United States and Canda can watch IND vs ENG live telecast on Willow TV while England vs India live streaming on Hotstar.

The subscriber of Reliance Jio and Airtel can access the Disney+ Hotstar VIP subscription with the prepaid plans. Download the Jio TV app and Airtel TV to get access of India vs England 2022 cricket matches on phone.

The OTT platform YuppTV has hold the TV rights for South Asian countries including Malaysia, Singapore and Europe to have the live telecast and live streaming of India vs England cricket match.