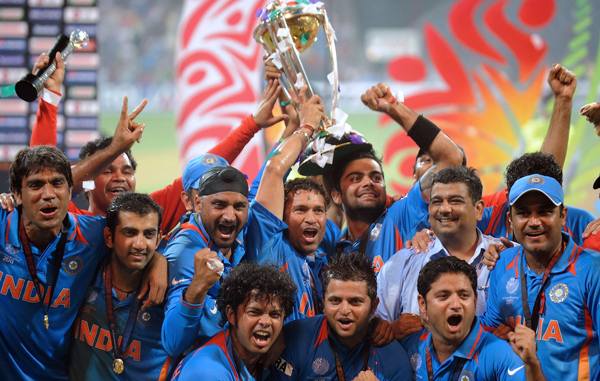 The 12th edition of the Cricket World Cup is going on and here’s ICC Cricket World Cup winners list and runners-up 2019. Over the years a lot of things have changed. The first 3 World Cups were played in the 60 over format, after which they were played in 50 overs. Two more common factors of the first 3 editions of the World Cup is that they were all hosted by England and were known as the Prudential World Cup. It was named after the company, Prudential Assurance Company, which was sponsoring the tournament.

This tradition of adding the sponsor’s name to the World Cup was followed till 1996. From 1999 onwards it came to be known as the ICC World Cup and is still called so. Out of the 10 teams that are taking part in the ICC Cricket World Cup this year, England, South Africa, New Zealand, Bangladesh and Afghanistan have never won the trophy. West Indies and India have both won twice, while Australia has won 5 times. Pakistan and Sri Lanka have won the trophy once each. Here are the complete ICC Cricket World Cup winners list and runners up till 2019.

1975 – The first World Cup was known as the Prudential World Cup and was held in England. The 8 teams that were participating were :

West Indies won the Final by defeating Australia by 17 runs. Clive Lloyd was the Captain of the team.

1979 – Even this year, the Trophy was known as the Prudential World Cup and was held in England. The number of teams playing were 8 but there was a change :

Once again under the Captaincy of Clive Lloyd, West Indies became the champion, defeating England by 92 runs.

1983 – The Prudential World Cup was held in England and the number of teams playing were 8. They were :

1987 – The World Cup held this year was known as the Reliance World Cup, by the name of the sponsors. It was hosted by India and Pakistan jointly. The ODI format had shifted from the 60-over to the 50-over version. The 8 teams which were playing the World Cup were :

Australia won their maiden World Cup title by defeating arch-rivals England by 7 runs. Allan Border was the ten Captain of the Australian team.

1992 – In the Benson and Hedges World Cup that was hosted by Australia and New Zealand, there were 8 teams which were taking part, they were :

Pakistan won the World Cup, with Imran Khan as the Captain. England lost the Final match by 22 runs.

1996 – This was the first time that the World Cup was being hosted by 3 countries together – India, Pakistan and Sri Lanka. It was known as the Wills World Cup, named after its official sponsors. In this World Cup, 11 teams were taking part. They were :

Arun Ranatunga captained Sri Lanka to victory. It was the 1st time they won this coveted trophy, defeating Australia by 7 wickets.

1999 – From this World Cup onwards, it officially came to be known as the ICC Cricket world Cup. The maximum number of matches were played in England, and the rest were played Ireland, Scotland and Netherlands. 12 teams played in his World Cup :

Australia won the World cup again, this time under the captaincy of Steve Waugh. They beat Pakistan by 8 wickets.

2003 – South Africa, Zimbabwe and Kenya were hosts for this World Cup. From this year onwards, Bangladesh stated to take part in the World Cup and became a regular. The number of teams playing in the World Cup kept on increasing over the years and in this year it was 13. The Teams were :

Australia make a record by winning the World Cup the highest number of times – 3. This time the Captain was Ricky Pointing. They defeated India by 125 runs in the Final match.

2007 – This World Cup held in the West Indies saw the most number teams participating in a World Cup. The 16 teams were :

2011 – For the first time one of the teams hosting the World Cup won the trophy. The matches took place in India, Bangladesh and Sri Lanka. 14 teams took part in this World Cup, they were :

India won the World Cup for a second time. They defeated Sri Lanka by 6 wickets. This time it was under the captaincy of Mahendra Singh Dhoni.

2015 – The World Cup took place in Australia and New Zealand and once again, one of the hosting nations was the Champion. The 14 teams that played were :

Australia won the World Cup for a record 5th time. Michael Clarke led the team to defeat New Zealand by 7 wickets in the Final match.