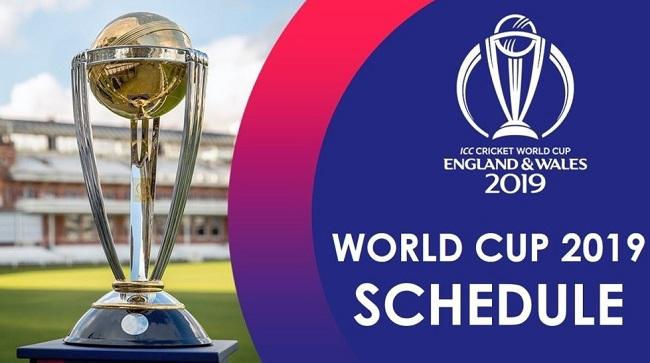 The ICC World Cup 2019 time table and semifinals schedule is almost confirmed, it would be a top priority for all the cricket fans as the biggest cricket event of the year is all set for semifinals July 9. The world cup 2019 to feature 48 matches including the 45 group matches, two semifinals and the final which is to be played on July 14. The warm-up schedule of ICC Cricket World Cup 2019 is also out for the fans.

The 46-day tournament to be played across 11 venues in England and Wales. The semi-final matches between the top four qualifying teams to be held in Manchester and Birmingham. One of the most exciting matches of the tournament will take place on 16 June when Arch-rivals India take on Pakistan at Old Trafford. India World Cup 2019 schedule for the group stage starts on June 5 and ends on July 6. Many exciting matches are set to witness ICC Cricket World Cup 2019 schedule when all the ten teams will battle it out for the golden trophy. Defending champions of the World Cup, Australia will start their campaign against Afghanistan at Bristol while India to South Africa on 5 June in the ICC Cricket World Cup opener match.

While looking at the above ICC Cricket World Cup 2019 schedule, you will find many entertaining matches in the group stages. Australia takes on New Zealand, Australia vs England on June 25, etc.

The ICC Champions Trophy winners Pakistan to start their World Cup campaign againstWest Indies on 31 May while the host England to face South Africa on May 30.

The World Cup 2019 time table sees every team to play a total of nine matches in the group stage to be in the top four teams who will qualify for the semi-final. As per the World Cup 2019 schedule, there are two semi-finals and final with a reserve day.

The home of cricket Lords to host the final of the World Cup 2019 while the two semi-finals to be played at Edgbaston and Old Trafford. The London stadium is set to host the opening ceremony.