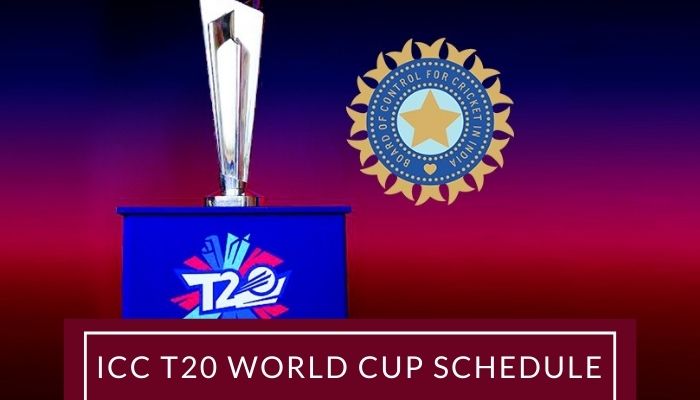 T20 Cricket World Cup 2023 schedule is out, the tournament will begin on October 17 and final on November 14 in UAE. WC will feature India, Pakistan & New Zealand in same group.

After a long wait, the ICC T20 World Cup 2023 schedule is confirmed, the competition will start from October 17 in the UAE, while the final is to be played on November 14. The fans will once again witness the biggest match of cricket in the ICC T20 World Cup as India and Pakistan have been placed in the same group apart of New Zealand.

The T20 World Cup was originally scheduled to occur last year, but it was postponed due to COVID-19. The first round of the event will feature 12 matches between the eight teams.

Bangladesh, Sri Lanka, Namibia, Oman, Papua New Guinea, Ireland, Netherlands and Scotland will fight in the first round of T20 World Cup 2023 to play with the top eight ranked T20 teams. Out of four, only four teams will qualify for the Super 12s.

The cricket fever is all set to resume with the ICC T20 World Cup 2023 in the UAE. The dates and venues of the tournament are finalized, and the T20 World Cup schedule and full match fixtures are to be announced soon. All the matches will be played at three venues in the UAE – Abu Dhabi, Dubai, and Sharjah.

The Super 12 round of the T20 World Cup 2023 will feature 30 matches from October 24. All the twelve teams will be divided into two groups of six teams each.

The two teams from each group will reach the semi-finals, and the winners of the semis will play the final match of the T20 World Cup 2023 on November 14.

The 2023 T20 World Cup features a total of 16 teams who are taking part in the action-packed tournament. The competition will include the top 8 full members and regular Test-playing nations

Apart from these nations, the 7th edition of the ICC T20 World Cup will also feature the debut of Papua New Guinea and the other seven teams for the first round of play.

The top 8 teams, including the hosts, will qualify to the Super 12s round, while the rest eight teams will be divided into two groups, and the top 2 of each group will join the Super 12s.

India also hosted the previous edition of the ICC T20 World Cup back in 2016. West Indies have crowned champions in the final at the Eden Gardens, Kolkata, after defeating England by four wickets.

West Indies became the first team to win the tournament twice, as they had also won in 2012, beating hosts Sri Lanka in the final.

The Board of Control for Cricket in India (BCCI) is struggling to finalise the T20 World Cup 2023 timetable, which is expected to be scheduled in October-November. The host is dealing with the second wave of Covid-19, and if the situation did not improve then, BCCI would have to host the T20 World Cup outside the country.

According to reports, the International Cricket Council (ICC) will decide on the T20 world cup in July 2023. On the other side, BCCI is confident that this situation will improve soon, and the World Cup would take place in India as per the schedule.

The 7th edition of the ICC Men’s T20 World Cup was previously scheduled in Australia from 18 October to 15 November 2023; it was postponed due to the Covid19 pandemic. ICC announced that Australia would host the 8th edition of the tournament in 2023.

Hosts India will be sure to shot favourites in the tournament as they currently rank 3rd on the current ICC T20 rankings. Current World No.1 on the ICC T20 Rankings are Australia. They have a reliable team and are definite contenders for the trophy next year.

The 2019 ICC World Cup winners are ranked 2nd on the T20 Rankings and looking to bag their second ICC trophy. Though the West Indies is currently ranked 10th globally, the defending Champions indeed have the experience and know-how to win ICC T20 World Cups and have a very experienced side lead by Keiron Pollard.