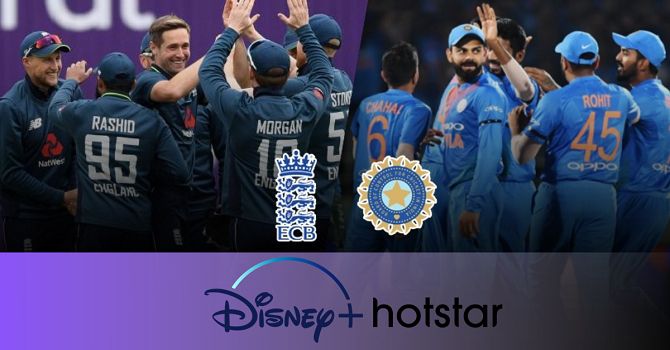 England Tour Of India 2022: Disney+Hotstar To Telecast The Series in UK & India

England vs India 2022 Live Telecast on Star Sports: Watch IND vs ENG Live Streaming cricket match on Hotstar App in the UK and India. England is all set for the Pink ball Test as India is hosting the Britishers for 4 Test matches, three One Day International (ODI) and five Twenty20 International (T20I) matches series starting from 5 February – 28 March 2022.

After 4 years, England touring India, the last being in 2016-2017, hence the number of eyeballs waiting for the series would be of great magnitude.

Talking about viewership. here is where the broadcasters try to jump in to maximize their profits. Star network has been licensed to telecast the series, but do you know about their landmark deal which is making them in the news? This article will inform you about the Star network’s exclusive deal in the UK.

England vs India 2022 Live Telecast: Watch IND vs ENG Streaming on Disney+Hotstar In India And UK

The biggest Indian sports OTT platform Disney+Hotstar is expanding to other territories than India as it is planning to exclusively Live Stream India vs England series on Hotstar in the market of the United Kingdom.

Disney star India holds all the rights to broadcast every series which is played in India for Indian viewers, but for the first time in their history of telecasting, they will broadcast a series outside India.

Generally, any sporting event in the UK is covered either by BT sports or Sky Sport, although even their telecasting license is limited for the events taking place in the UK itself since the series is in India, star network took the opportunity and will now telecast England vs India 2022 live telecast in the UK for the UK viewers as well.

The move by star sports network would mean that UK viewers would have to pay to watch the series, they can watch the England Tour Of India 2022 live streaming on the Disney+Hotstar website or app.

However, they need to pay up to three separate subscriptions to watch mainstream international cricket. Hence the list of subscription rates for both nation’s viewers is as follows.

Indian Viewers can also view the match on their TV sets as Star Sports will broadcast the series in India.

Disney recently announced they expect to increase their number of subscribers to between 230 million and 260 million by 2024.

The squad and further details regarding the series will be updated soon by the BCCI or the star networks.