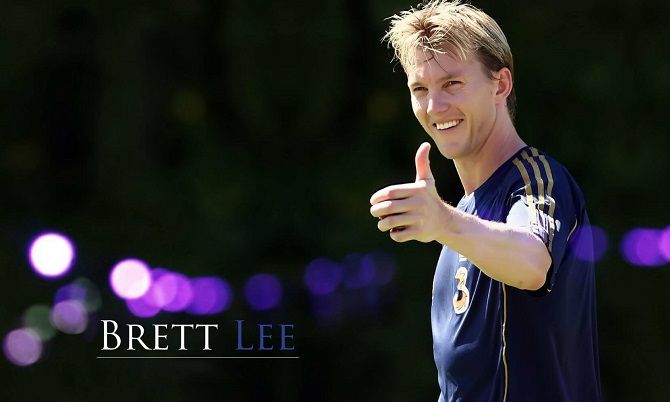 Brett Lee – The Warlock Of The Genuine Fast Bowling

Brett Lee and fast bowling when gets going there was no better sight in the world to get behold be it in the red-ball cricket or white-ball cricket. There are hardly a genuine fast bowlers in the history of cricket who can match the “trendsetter” of their teams like the early 2000s era when Brett Lee came into the Invincible Australian Team as one of the most dangerous fast bowler in the modern day era cricket.

Lee ability to bowl at 150 kmph excess makes him complete unplayable bowler of his era and put the opposition line-up into the shambles. Such was his aura and impact when he terrified every great batsman of that era who stood his way to define his complete rare fast-bowling skills.

It’s very fortunate that Brett Lee was the part of Ricky Ponting team who were filled with the genuine match-winners already and Brett Lee had created the column for himself in the Australian bowling division and dominated them single handily throughout his career in the presence of Glenn McGrath, Shane Warne, Andy Bichel and Jason Gillespie.

Before his debut Brett Lee had great numbers in domestic circuit with over 400 wickets in respective first-class cricket and List-A Cricket. At last, Brett Lee made his international debut in 1999 against team India where he seized the five wickets on his first test and he was second bowler after the great “Dennis Lillie” to return with the fifer on debut.

Lee never looked after and turn into most complete right-arm fast bowler in the white-ball cricket in terms of impact from the red-ball cricket. In the limited overs cricket Brett Lee was the complete different bowler from the rest when it comes to genuine fast-bowling.

The Coaching Manual Of Fast Bowling

If Australian team had the batting greats like Mathew Hayden, Adam Gilchrist, Ricky Ponting and Steve Waugh who have dominated the batting division then here was the bowler named Brett Lee who even in the absence of other Australian great bowlers was torch-bearer of Invincible Australian Team on any surface in the world.

Born in New South Wales, Brett Lee was the most dangerous bowler on the lush-green tracks of Australian grounds with his pace.

Equally, lethal on the pitches of New Zealand, South Africa and England. Brett Lee was the member of two world cup winning team of Australia (2003-2007).

Although, Lee was good bowler in the limited overs cricket but in the tournament like World Cup – Lee was genuine match-winner for his side with his supreme fast-bowling skills which included his Inswinger, Outswinger and toe-crushing yorkers against A-list teams.

Being a real fast bowler and the set of long history depicts fast bowlers are inclined to ups and downs of injuries and Lee was the same and gone through injuries all through his career yet he never tries to change on his instincts of fast bowling.

Brett Lee test cricket records could’ve possibly more better if not hang up his boots in 2008 because of injuries throughout his career else he could’ve finished more than 600 wickets as the fast bowler.

Famous with name “Binga”, Lee was first-ever bowler in the newest format called T-20 cricket to grabbed the hattrick against Bangladesh. In the Cricket Australia history Brett Lee became the second fastest bowler to reach 100 wickets in white-ball cricket in the 55 Matches. The first bowler is Mitchell Starc who has reached the milestone of 100 wickets in 52 matches.

Lee best moment of his Career came in the year 2005 against New Zealand, when Lee bowled the fastest over in the cricket with fastest delivery of 161.1 kmph and furthermore the part of numerous T-20 tournaments around the world yet before the end 2015 Brett Lee hang up his boots from International Cricketing field for Australia.

Despite the fact that Lee Retired from limited overs Cricket in 2012 yet be part numerous T-20 tournaments for the following four years to at retired from Cricket. It was end of complete coaching manual of fast bowling career ever throughout the entire existence of cricket or once in a blue moon player.