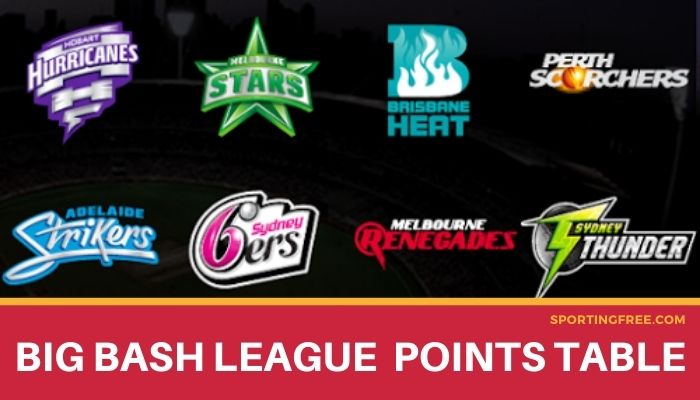 Australia’s famous and premier T20 cricket league, Big Bash 2022/21 begins on December 10 with Hobart Hurricanes taking on defending champions Sydney Sixers. Sydney Sixers is currently leading the Big Bash points table 2022 followed by Sydney Thunder. The tenth edition of the KFC Big Bash League features eight teams who are battling it out to be in the top four on the BBL points table.

All teams are scheduled to play in the double round-robin format where each team will against every other team twice to reach the playoffs. Find all the latest updates on Big Bash 2022-21 points table with match results, team standings, rankings, points, total wins and losses and net run rate.

The top five teams on the BBL points table will advance to playoffs. Know the status of every team in the league through the BBL points table which will be updated after each day. Fox Sports to broadcast all the matches while SonyLiv to have the BBL live stream in sub-continent and India.

The first and foremost aim of the eight teams in the League will be to finish in top five on the Big Bash League 2022-21 points table.

The tournament will feature total 61 matches and after the completion of groups stage, the four teams who will play in the playoffs will be determined based on their points.

However, after every win, each team will get 2 points and if in the case match got interrupted because of the rain or any other natural calamities then both teams will be rewarded with 1-1 points. If a match is tied, then Super Over will decide the winner and the winning team will get two points.

Whereas, the Net run rate of each team will be considered in qualifying rounds. The top four teams in the Big Bash League points table will reach the playoffs and winners will reach the final to win the BBL title.