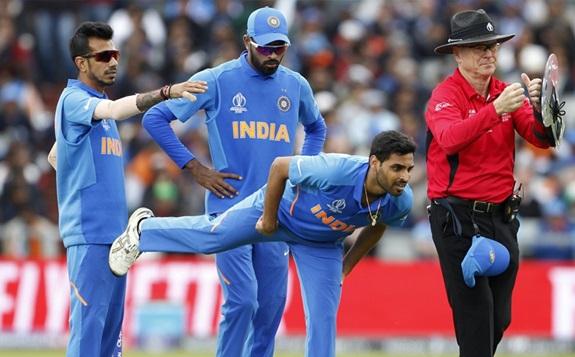 In the 22nd match of the tournament and the 4th match for India in the ICC Cricket World Cup 2019, Indian pacer Bhuvaneshwar Kumar slipped on the footmarks in the landing area while delivering the ball. He left the field after bowling the 4th ball of his 3rd over. The match was against Pakistan at Old Trafford, Manchester and India won it by 89 runs (DLS method).

Bhuvaneshwar had opened the bowling attack in this particular match but left the field because of the injury. He could not rejoin the team on the field as he felt tightness in his left hamstring. His incomplete over was completed by World Cup debutant Vijay Shankar, who took the wicket of Imam-ul-Haq in his first ball. Team India all-rounder Shankar gave away 22 runs and took 2 wickets in 5.2 overs. The absence of the right-arm pacer did not bother the Indian team much as the other bowlers managed to take wickets at regular intervals which helped India to win the match by a margin of 89 runs.

At the presentation ceremony in Manchester, Captain Virat Kohli while speaking about the pacer’s injury said that “It doesn’t look too serious at the moment.” He should be recovering within a few games and be on the field to help his country win matches. Currently ranked 17 in the ODI Bowling ranking, Bhuvaneshwar is very important to his side. Bhuvi (the name his teammates call him by) took 3 wickets against Australia, giving away 50 runs in his 10 overs.

This match was held on the 9th of June 2019 at The Oval, London. On the 5th of June 2019, against South Africa, Bhuvaneshwar Kumar took 2 wickets and gave away 44 runs at the Hampshire Bowl, Southampton. He did not have to contribute with the bat in any of the matches that he played in the ICC Cricket World Cup 2019.

Owing to his hamstring injury, Bhuvaneshwar will have to sit out the next two matches of the Indian team. Their next match is against Afghanistan on Saturday, the 22nd of June 2019 at the Hampshire Bowl, Southampton. It will be followed by the match against West Indies on Thursday, the 27th of June 2019 at the Old Trafford, Manchester.

With opening batsman Shikhar Dhawan already sustaining a thumb injury, it would be a big blow to India if both its currently injured players have to return home mid-way from the World Cup.