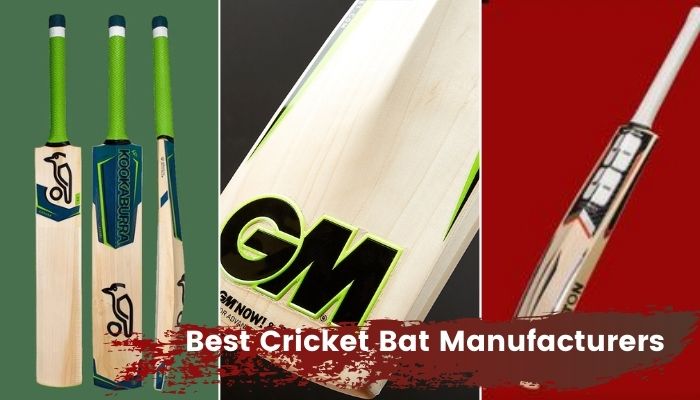 The most enthusiastic sport in the world, cricket has changed a lot over the years and the same story is with the bat. The cricket bats have seen many changes to meet the requirements of today’s cricket. The introduction of the T20 cricket has largely impacted the size and weight of the bats. So, let see who are the world’s best cricket bat manufacturers?

Cricket has witnessed a lot of International Cricketers with their versatile playing style which definitely requires a Bat as per them. Whether is the Royal English Willow for Test Match or the baseball style Kookaburra cricket bats.

Sanspareils Greenlands popularly known as SG is established since 1931. It is an Indian manufacturer of wide variety of sports kits. The Major manufacturing of the SG bats is done in  Meerut, India. It Generally exports its classic willow Test Match Bats to England and Australia.

Whereas Nexus Plus, RSD Spark, RSD Plus, VS 319 Spark, Phoenix Xtreme etc are the Kashmir Willow Bats. Since the Old Cricket days Sunil Gavaskar, Rahul Dravid, and Virender Sehwag are the Loyal SG bat users.

Spartan Sports is an Australian Manufacturing Company which produces a wide range of Sports Kits and equipment. The company generally focus on making modern cricket flash blades Bats. The Quality of Spartan bats is Spot on with its solid grip as well as maximum edge thickness.

Another Australian sports equipment Manufacturing company is the Kookaburra Sport. The Company is founded by AG Thompson naming the brand name after his pet Kookaburra.

The brand is worldwide famous for making cricket balls for the One Day Internationals and Test matches but it is also known for its t20 bats. Kookaburra Kahuna, Kookaburra Dynasty, Kookaburra Storm, Kookaburra Onyx and Kookaburra Ghost is their range of Bats.

Well, the world’s most Acrobatic and Athletic 360 Cricketer, the South African Captain in ODI’S and Test. Yes, you guessed it right. AB De Villiers plays with the Kookaburra Kahuna bat. Kookaburra is one of the best cricket bat manufacturers in the world.

The company is widely used Bat in England and maximum players from England’s Domestic Cricket use this Bat. Meanwhile, the Gunn and Moore Bats have thin edges and are also Light in weight.

GM Bats are great to use for quick bat speed. Eoin Morgan the England International Captain is the Brand Ambassador of the Gunn and Moore.

Sareen Sports Industries exports their SS bats to UK, Australia, South Africa, Sri Lanka and Bangladesh. Established in the year 1969 by N.K. Sareen but came to be used since 1976 with the Launch of SS Sunridges bat. SS Gusty, SS Extreme, SS R-7 are the famous Kashmir Willow SS bats.

Whereas SS Gladiators, SS Ton Matrix, SS Professional are some of its Renowned English Willow Bats.  Yuvi 20/20, Sir Richards are the two special Edition SS bats made for the Tribute of International cricketer Vivian Richards and Yuvraj Singh.

SS Bats are famous for its toughness, stroke, and Durability. The Stroke of both English and Kashmir Willow SS Bats makes the world’s most pleasing sound when the Ball connects the Bat. As of now, SS is the best cricket bat manufacturers in the world.

These are some of the bat manufacturers in the world who produces quality bats for the cricketers which help not only cricketers to play their best shorts but also improves the standard of cricket.