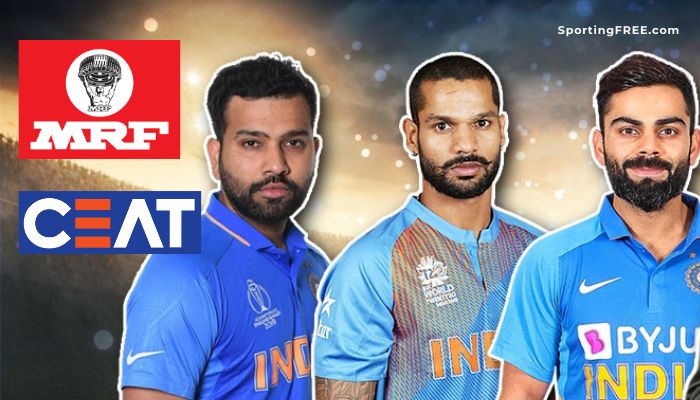 The players have been payed huge sums of money by brands to show logo on the bat and here are some of the best bat sponsorship deals in Indian Cricket right now. And there is no surprise to this as India is the country which played the highest number of international matches in a year, and Indian Cricket team players have a massive fan following around the globe wherever they travel on tours.

These companies don’t miss a chance to feature their brand logo on the bats of these India cricket icons, and ready to pay a heavy deal of cash for it.

There are several iconic and famous sponsorship deals between great companies and great players throughout the years, some of them are MRF with Sachin Tendulkar, Britannia with Rahul Dravid, Sehwag with Hero Honda. Let take a look at the Top 5 bat sponsorship deals in Indian cricket.

At the top of this list is none other than our phenomenal Indian Captain and arguably the best batsman of this generation Virat Kohli. All the greats of the game recognize Virat as a Global Cricketing icon, the poster boy of Indian cricket, he has inspired so many youngsters to pick up and play the sport.

Virat is one of those rare players of this modern generation who possess sound technique and orthodox batting style.

Kohli has the biggest bat Sponsorship deal in the history of the sport, paying him 12.5 crores annually making it a whopping 100 crores deal over 8 years with MRF tires, India’s leading Tyre Manufacturers. Kohli earns a huge sum of money from his bat deal with MRF which is right now the bat sponsorship deals in Indian cricket.

Mahendra Singh Dhoni will always remain one of India’s greatest cricketers, he revolutionizes Indian cricket with his leadership skills and self-belief. MSD, Captain Cool, Thala, Mahi, fans cheer using a lot of names after Sachin Tendulkar Dhoni is the most celebrated Cricketer in India.

Dhoni is the only Captain ever to win all three ICC limited over tournaments. Whether it be when he is playing for the Indian team or Chennai Super Kings in the IPL, brands have always wanted to link and associate with him to endorse their brand.

Australian company Spartan signed a 3-year contract worth 13 crores to feature on MS Dhoni’s bat whilst he hits sixes with his helicopter shots and wins matches for his team.

Yuvraj Singh deemed as one of India’s biggest legends in cricket, played a vital role in India’s 2011 ICC Cricket Worldcup triumph. Throughout his career, Yuvraj gained a huge fan following especially after the NatWest Trophy where he hit 6 sixes in an over against England.

Yuvraj Bagged a 4 crore per year deal in 2011 with PUMA, the leading sports clothing, equipment, and sports accessories company.

Rohit Sharma has come a long way from just an off-spinner who could bat to one of India’s finest openers in white-ball cricket. Each of us knows how flamboyantly Rohit hits those big sixes when India needs it the most.

India’s stylish left-handed opening batsman Shikhar Dhawan has risen through the ranks to cement his spot in the Indian team. Shikhar is always entertaining his fans, whether it be his trademark thigh slap celebration or his crisp on drives. The Indian opener has got one of the bat sponsorship deals in Indian cricket right now.

MRF jumped the opportunity to sign this Delhi boy when he was rising to fame with a 3 crore per year bats Sponsorship deal. Dhawan is one of India’s most bankable players when it comes to ICC tournaments.