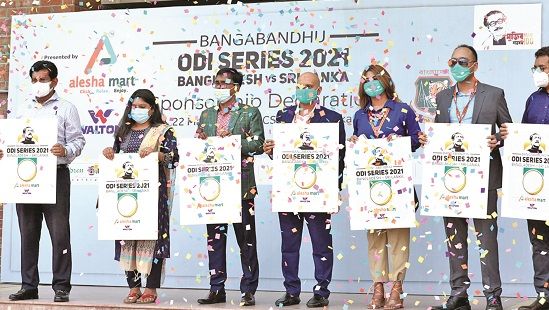 According to sources and reports, the deal is worth $3.84 million. The new deal will last for 28 months, till 2023. Alesha Mart is a sister organization of the company Alesha Holdings Limited. The sponsorship rights were declared by BCB on Saturday, 22 May under the presence of BCB Chief Executive Officer Nizamuddin Chowdhury and media manager Jalal Yunus.

The agreement will come into effect immediately from the current ongoing three-match home ODI series of the Bangladesh Cricket team against Sri Lanka. The series will now be renamed as Bangabandhu ODI series, Presented by Alesha Mart.

The new deal will cover as many as eight home series of the Bangladesh Cricket Team. BCB has sold the rights of 44 international matches to the eCommerce company, which will involve 6 Tests, 18 ODIs, 19 T20Is.

After signing this deal, Alesha Mart joins the list of newly added sponsors of the Bangladesh Cricket Board. Daraz is their new team sponsor while Hungry Naki is their Kit sponsor. Last week, BCB sold its broadcasting rights to Ban Tech for $19 million. T sports and Gazi TV, later on, acquired these rights from Ban Tech.

Alesha Mart previously served as the Bangladesh Cricket team’s title sponsor during the Bangladesh tour of New Zealand in March- April. Bangladesh will face Australia, England and New Zealand at their home before going to the T20 World cup. Sri Lanka and Pakistan will arrive in Bangladesh for the test series. Afghanistan, Ireland and India are set to tour Bangladesh in 2022.