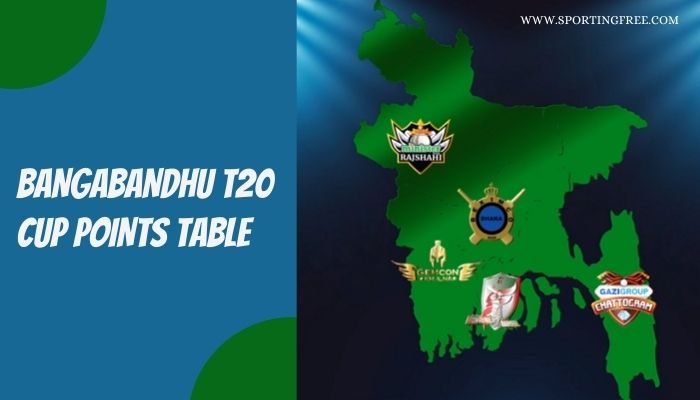 The T20 tournament is going on between five teams where each team is trying to win the title on December 18. Many popular Bangladesh players such as Shakib Al Hasan, who is returning after one-year ban, Tamim Iqbal, Mushfiqur Rahim and Mustafizur Rahman.

The Bangabandhu T20 Cup points table will be updated after each game with their win, loss, draw, net run rate and total points.

How does the Bangabandhu T20 2022 points table work?

The T20 tournament has held in the completion of 100 years of Father of the Nation Bangabandhu Sheikh Mujibur Rahman. All the matches are taking place behind the closed doors.

Every team in the competition will play against other teams in a round-robin format in the league stages and top four teams will qualify for the playoffs. The first two teams will play Qualifier 1 while 3rd and 4th placed team will Eliminator. Here’s are the points system.

The top four positions in the Bangladesh T20 standings will be determined by the points earned in the league stage.

Qualifier 1 and Eliminator of the Bangabandhu T20 Cup are taking place on December 14 while Qualifier 2 is on December 15. The final match is scheduled on the 18th December 2022.