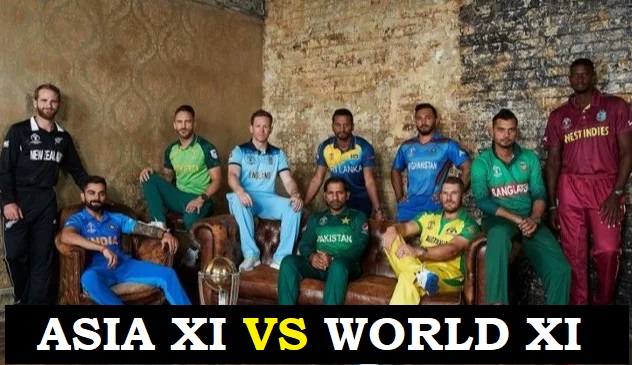 The most-waited cricket series, Mujib 100 T20 Cup Bangladesh 2022 between Asia XI vs World XI is scheduled to take place on 18 to 21 March 2022. The two-match T20I series between Asia vs World XI to be played at Sher-e-Bangla Stadium in Dhaka. The Asia cricket team to have popular players like Virat Kohli, Shikhar Dhawan, Mustafizur Rahman, Tamim Iqbal and Malinga. The live telecast of the Asia 11 vs World 11 T20 cricket match will start at 6 pm IST and Asia XI vs World XI live streaming is available on Hotstar app.

Earlier, one of the matches between Asia XI vs World XI was to be played at the Motera Stadium in Ahmedabad. But due to some delay, the match then sifted to the Sher-e-Bangla Stadium. Bangladesh Cricket Board (BCB) wants Indian captain Virat Kohli to be part of the series but its yet to be finalized. The two T20 matches are scheduled in Dhaka to celebrate the 100th birth anniversary of the father of Bangladesh Sheikh Mujibur Rahman. The first match of the Asia XI vs World XI cricket series is set to take place on March 18 while the second game to be held on March 21.

The live coverage of the T20 matches between Asia XI vs World XI will begin at 6 pm IST while the pre-match show to star at 5 pm and toss are taking place at 5.30 pm IST. Star Sports Network holds the broadcasting of the matches in India and its subcontinent countries such as Nepal, Pakistan and Sri Lanka.

Gazi TV also has the broadcast rights of Asia vs World 2022 cricket series and GTV Live channel will telecast the matches in Bangladesh.

You will need to subscribe to Hotstar Premium or Hotstar VIP Plan:

There is also another way to watch Asia XI vs World XI live cricket streaming online on your smartphones and tablets. Get the active Reliance Jio and Airtel sim and then download Jio TV and Airtel TV to watch the live match without Hotstar premium subscription.

Now, open JioTV app and find the Star Sports 1 channel then click on it which redirects to you to Hotstar app to watch free live cricket streaming online.

There are two T20 International games are scheduled in the cricket series:

The opening match of the Asia XI vs World XI conflicts with the India vs South Africa 3rd ODI match, scheduled to take place at the Eden Gardens on March 18. Board of Control for Cricket in India to release five players for the all-star match while players from Bangladesh and Sri Lanka are also playing in the Asia 11.