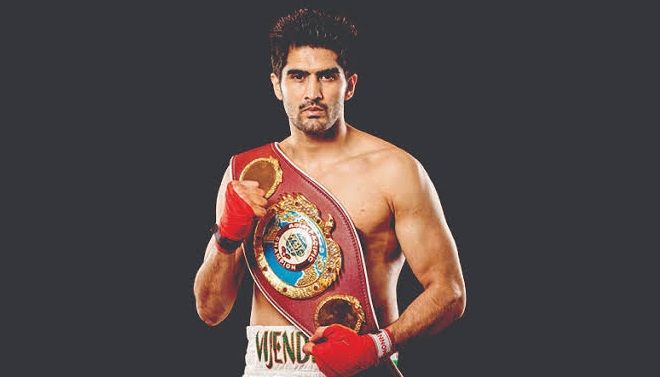 Vijender Singh’s Next Fight on Nov 22, Opponent Yet to Be Revealed

Vijender Singh’s Next Fight Announced! India’s professional boxer Vijender Singh will compete in his next game on 22nd November at Dubai. His opponent for the game will be announced shortly. Vijender has an impressive record in professional boxing. He is unbeaten in his 11 games so far. In addition to it, he has won eight of those games by knockout. He will look to extend his record. Vijender stepped into professional boxing in the year 2015. His first opponent was Britain’s Sonny Whiting. He beat the latter by knocking him out at the Manchester Arena in the UK.

Vijender then beat UK’s Dean Gillen by knockout at the Dublin National Stadium.

Vijender took to the Manchester Arena in his third game against Bulgaria’s Samet Hyuseinov. He beat Hyuseinov by knocking him out on 19th December, 2105.

The Indian pro boxer fought in his 4th professional game on 12th March 2016 at Echo Arena, Liverpool. This time his opponent was Hungary’s Alexander Horvath. Vijender beat him by knockout to carry on his winning streak.

Vijender fought his fifth professional game against France’s Matiouze at the Copper Box Arena, UK. He beat the latter by knockout on 30th April 2016.

Polish Andrzej Soldra was Vijender’s next victim. They both fought at the Macron Stadium in the UK on 13th May, 2106. Vijender knocked out Soldra and won his sixth straight game.

Tanzania’s Francis Cheka fought Vijender on 17th December 2016. The latter beat the former by Knockout at the Thayagraj Sports Complex. He retained his title with this win.

Vijender beat China’s Zulpikar Maimatali at the Sardar Vallabhai Stadium in Mumbai in his ninth professional game. After this victory, he retained his former title and also won the WBO Oriental Super Middleweight title.

Vijender fought Ghana’s Ernest Amuzu on 23rd December 2017. They competed at the Sawai Mansingh Indoor Stadium in Jodhpur. Vijender defeated Amuzu by Unanimous Decision and retained both his titles.

Vijender’s last game was against Mike Snider of the USA. It was Vijender’s first fight in the US. He beat Snider by knock out at the Prudential Centre at New Jersey.

A wonderful opportunity for me: Vijender

Vijender is currently training in Manchester under his trainer Lee Beard.

“This is a wonderful opportunity for me to showcase my skills and to keep active as I continue my world title quest,” Vijender said.

“I was proud of my last performance back in July, but I was coming off a long layoff. I am rounding into form, and fans are going to see the best version of Vijender Singh when I fight in Dubai,” he added.

Vijender Singh’s Next Fight on Nov 22

After winning the American fight, Indian boxing star Vijender Singh will fight in Dubai on November 22 against an opponent that is yet to be announced. The unbeaten Vijender has a very impressive record (11-0, 8 KOs) and would look to continue it.