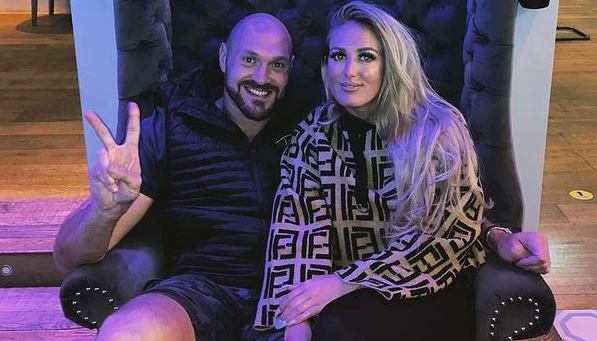 Paris Fury: Everything you need to know about Tyson Fury’s wife

Tyson Fury is currently in Miami preparing for his next fight. Recently, one of his photos along the poolside with females around him has gone viral. Boxing heavyweight champion, Fury admitted that he was in the bad books of his wife, Paris Fury. Fury’s wife confirms it and shared a picture on Instagram without the wedding ring which also got attention.

However, the couple sorted things out, after Paris Fury flew to Miami and shared a picture of kissing her husband, Tyson Fury on Instagram. This is the first time Fury’s wife, Paris has been in the limelight.

Usually, she is the exact opposite of his famous husband Tyson Fury when it comes to social life and public appearance. Here’s everything you need to know about Tyson Fury’s wife.

The 31 years old, Paris Fury was born on 5 December 1989. She grew up in a traditional Gypsy family in Wythenshawe, Manchester.

Paris worked as a beautician. She was also a guest panellist on the British talk show – Loose Women. She is all set to release an autobiography in the second half of the year. Paris Fury is also a model and a TV personality.

When did Tyson Fury Meet his Wife?

At age of 15, Paris Fury met Tyson Fury for the first at a mutual friend’s party. A year later, they met again and started dating at the age of 16. The couple were seen on movie dates and doing ice skating during weekends.

After dating for several years, Tyson Fury and Paris Fury finally tied the knot in 2008. They married in a traditional gyspy style in Paris hometown. The marriage was witnessed by 300 people.

The couple kept the travellers’ tradition of not sleeping together until their wedding night. Paris Fury in an interview said, “ Even after we got engaged, Tyson used to sleep in a caravan at my parents’ home, while I used to sleep inside the house with my parents”.

READ: Mike Tyson Children: All We Know About The Tyson’s Kids

In an interview, Tyson revealed the reason behind naming his sons prince. “ Since I am the king, they are princes until they earn their right name and become a king”, he explained. Previously, Paris said Tyson wants 10 kids. Paris is currently pregnant with their sixth children, confirmed in Mach 2022, it is a boy.