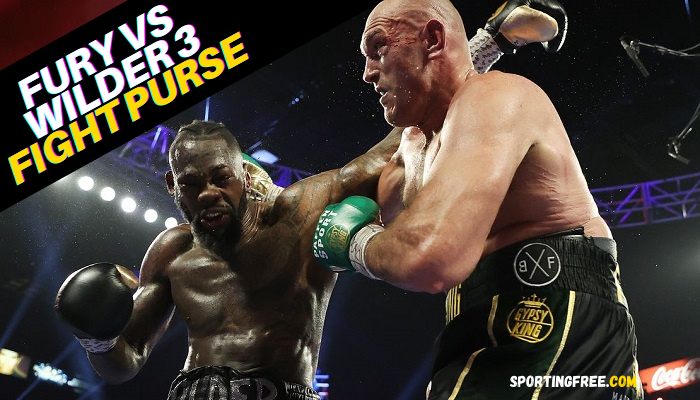 Tyson Fury vs Deontay Wilder 3 fight purse: Both the heavyweight boxers could earn massive money from their third fight.

The third fight between heavyweight boxers, Tyson Fury and Deontay Wilder is all set to take place in the United States of America on Saturday, July 24 2022. Fury was about to fight Anthony Joshua in August, however, now the ‘Gypsy King’ will first need to defeat Wilder to claim the WBC belt and face off Joshua. According to reports, Tyson Fury vs Deontay Wilder 3 fight purse will have a 60-40 split and both fighters will take home massive money from their anticipated third re-match.

After facing a seventh-round TKO defeat to Tyson Fury, Wilder had a rematch clause in their contract to fight for the third time. Despite knowing the fight contract, Fury was set to fight Anthony Joshua to become the undisputed Heavyweight Champion of the World featuring all the belts.

As per the fight contract, Wilder vs Fury 3 purse payout will be spilt in a 60-40 in favour of Tyson Fury. The British heavyweight boxer is set to pocket guaranteed $30 million from the third fight plus a share of the pay-per-view profits. While Deontay Wilder get guaranteed $20 million, plus a percentage of the PPV profits.

In the rematch, Wilder and Fury were reported to earn around $25 million each excluding the share of the pay-per-view profits. The fight purse of the first encounter between the two heavyweights, Deontay Wilder and Tyson Fury were $4 million and $3 million respectively apart from sponsorship deals and PPV revenue.

The promoters are expecting to earn $100 million from the PPV revenue which means Fury will earn 60% which is quite a huge amount compared to his last fight.

Top Rank that promotes Fury has revealed that Allegiant Stadium is the location for the Tyson Fury vs Deontay Wilder 3. The stadium has a seating capacity of 72,000 which is expected to generate more revenue.

The broadcasting rights of Wilder vs Fury 3 is reserved by Fox Sports in the US and BT Sports to have the live streaming of the fight in the United Kingdom.

The above purse payouts of Fury vs Deontay 3 are based on the research and not officially announced. The payout money will majorly depend on PPV revenue.