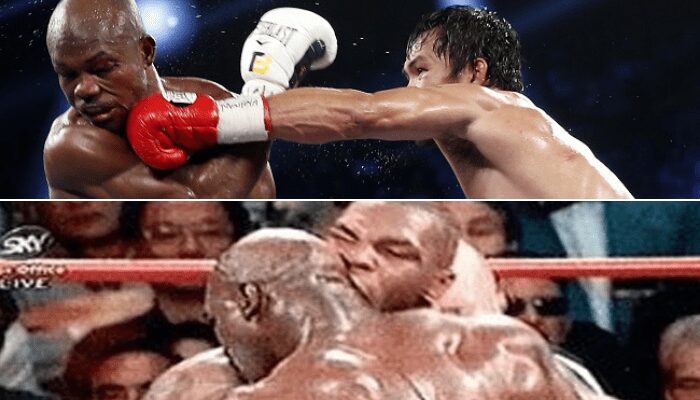 The 5 Most Controversial Moments in Boxing History

Manny Pacquaio is one of the best fighters in the pound for pound division. He has won titles in eight divisions. In 2012, his loss to Timothy Bradley by a split decision was regarded as one of the famous controversies of boxing.

In 1996, Andrew Golota faced Riddick Bowe. The earlier one has a professional record of 28-0. In boxing, you cannot hit below the belt. But, Golota, despite numerous warnings from the referee, kept on hitting below the belts.

In the end, the referee disqualified him, and it resulted in the brawl between the two fighters staff and situated turned into chaos.

British boxer Lennox Lewis faced Evander Holyfield for the heavyweight title at MSG in 1999. Lewis clearly dominated the fight and landed some mouthwatering jabs and hooks.

But the judging panel, instead of declaring him the winner, split the decision and called it a draw. However, eight months later, Lennox defeated Evander in the rematch and won the WBA and IBF titles.

The Olympics is the most prestigious sporting event. Every athlete dreams of winning an Olympic medal. In the 1998 Seoul Olympics Games, Royu Jones Jr. faced Park Si-Hun in the gold medal match in the light middleweight category. Jones Jr. landed almost twice the number of punches by his opponent.

But, the final decision went in the home side’s favour. The IOC also organised an investigation and found no evidence of corruption. To this date, it remains one of the most controversial decisions in boxing history.

This infamous and controversial moment took place in boxing history in June 1997. Mike Tyson lost the WBA heavyweight title to his fellow countryman Evander Holyfield. Holyfield was alleged to headbutt one of Tyson crew members.

Tyson retaliated, and legitly bit Holyfield’s ear. After the incident, Tyson was disqualified, and Holyfield was declared the winner. Courtesy of the incident, he even lost his boxing license.