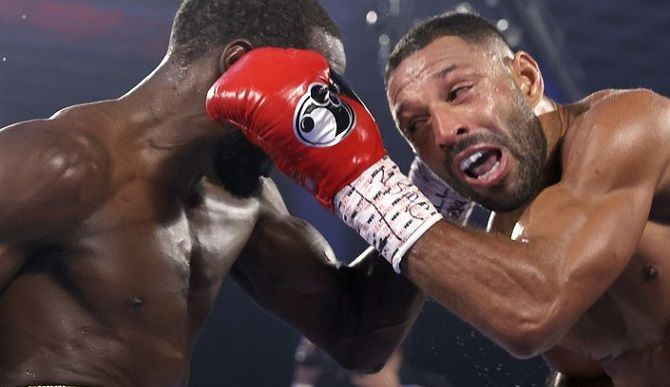 WBO recognized Welterweight champion Terence Crawford took on Kell Brook, who was challenging for the title. However, the match took place on 14th November 2020 at the MGM Grand Conference Center, Paradise, Nevada, U.S. The match was a big-time entertaining one and the Terence Crawford vs Kell Brook purse payouts was a whopping $ 4.5 million Dollar.

The match was a traditional 12 round match, however, the champ Terence Crawford threw fire at Brook and retained his title after knocking him out in the 4th round.

The match was played behind closed doors, thus there was no gateway income hence it is understood that both the boxers were paid less than their earlier fights, but how less that is the main question.

The match was promoted by Top Rank on ESPN and the broadcasting channel decided to put up the fight on Pay-per-view which was criticised by many, anyway the PPV distribution among players is that Terence Crawford gets 60% and Kell Brooks gets 40%. Thus the total guaranteed Terence Crawford vs Kell Brook purse payouts are

The 33-year-old won his WBO recognized Welterweight champion back in 2018 after defeating the then champion, Jeff Horn. Crawford has fought a total of 37 fights and is yet to be defeated.

Kell Brook who is much more recognized and experienced than Terence Crawford is sadly nearing his retirement as the former IBF recognized Welterweight champion lost humiliatingly on 14th night and got just $1.5 Million Dollars for his bout.

The maximum guaranteed purse amount that Brook won was in his fight against Gennady Golovkin in 2016, which was also the first defeat of his career. He charged a whopping £2.65m for that.

He held the IBF Welterweight title from 2014 to 2017 before losing to Gennady Golovkin. Brook’s total net worth is $12.5 million Dollar which is way higher than Terence Crawford. He has fought a total of 42 fights and lost just 3.