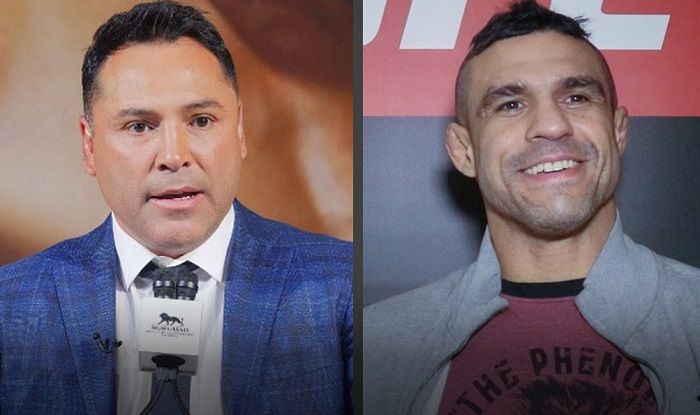 Oscar De La Hoya vs Vitor Belfort Date, Tickets, Time, Odds, Where to Watch and Everything You need to Know

A total of 8 rounds will be there, with each round lasting 2 minutes. Vitor’s last professional fight was back in 2006. Here are details about the Vitor Belfort vs Oscar De La Hoya fight.

Aged 44, Belfort is the former UFC heavyweight champion. He has the record of most UFC knockout wins (12) to his name. Belfort last fought in MMA in 2018. In professional boxing, he has a record of 1-0. In his professional boxing debut, he faced Josemaria Neves of Brazil in 2006. Belfort won by TKO within the first minute after knocking his opponent down three times.

Here’s everything you need to know about the Oscar De La Hoya vs Vitor Belfort boxing match, including the PPV start time, PPV price, location, streaming channels and betting odds.

When is the Hoya vs Belfort fight?

The exhibition match between Vitor Belfort and Oscar De La Hoya will take place on 11th September, as confirmed by MMA reporter Ariel Helwani in his recent post on Twitter.

The timing and venue of the fight are not decided yet. But, if sources are to be believed, then the Oscar De La Hoya vs Vitor Belfort fight is most likely to take place in Las Vegas.

Nearly after 13 years, Oscar De La Hoya will be returning to the ring. The six-division world champion will face Vitor Belfort, and the official broadcaster of live-action of the much-awaited exhibition bout has not been decided yet.

Return to this space to learn about how to watch the fight once the authorities decide the official broadcaster.

How to Buy Oscar vs Vitor Tickets?

The tickets for the fight between Vitor Belfort and Oscar De La Hoya are yet to be released. The tickets and price will only be revealed once the venue of the fight is decided.

You can return to this page to learn about the venue, ticket price and how you can buy the tickets.

The odds for both the fighters will be updated here as we go close to the fght.