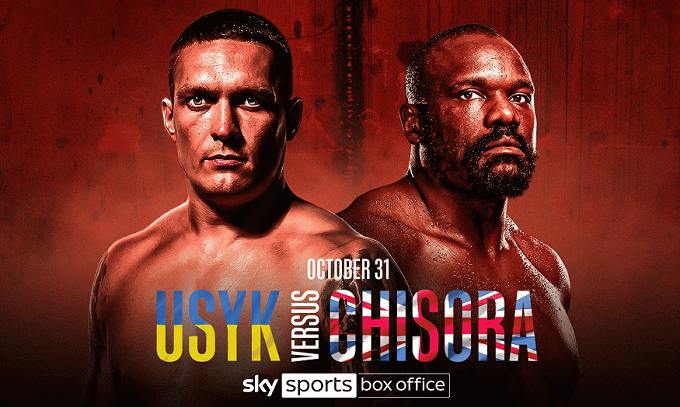 Halloween just got better for some and might get scarier for some. Yes, the fight of the year is here as the mighty heavyweights Oleksandr Usyk takes on Derek Chisora on 31st October in the heavyweight division. The live coverage of the bout is available on Sky sports box office in the UK and Oleksandr Usyk vs Derek Chisora live streaming to provide by DAZN in the United States.

The players will be facing each other for the first time in their career and here is everything you must know about the fight.

He became the cruiserweight player in history to hold all 4 major world championships. However, in 2019 Usyk vacated his titles and shifted to heavyweight, and set his sight for heavyweight titles.

Thus this year Usyk will be facing his first big test in heavyweight when he would take on Zimbabwe-born British player Derek Chisora at the SSE arena on 31st October.

Usyk is the world’s 5th best boxer as per rankings and rightly so as the Ukrainian is yet to be handed his first defeat in his professional career.

The local boy is evidently more expensive when it comes to stepping into the ring. Nicknamed as ‘ the war ‘ might actually prove to put a war on Halloween and create an upset on Halloween.

The fight was originally scheduled for 23rd May but got delayed due to COVID-19. The match now scheduled for 31st October will start at 6 pm GMT.

The coverage will begin at 6 pm. While the main event will start at 10 pm.

The fight sadly won’t be broadcasted locally in each country, instead, the fight would be broadcasted live at Sky sports box office in the United Kingdom and at their website for all the fans around the world.

The subscription for Sky sports box office can be purchased for £19.95. While the fans in the United States can watch this mouth-watering clash on DAZN.

DAZN channel also broadcasting boxing fight in Canada and you can watch Oleksandr Usyk vs Derek Chisora live online on the DAZN through its one-month free trial.

Sadly the SSE arena has to confine to the government guidelines and the fight will be held behind closed doors.