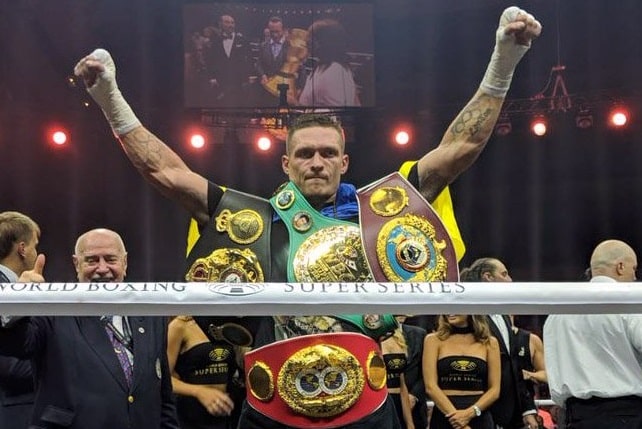 Oleksandr Usyk is a Ukrainian professional boxer. He fights in the heavyweight division. Usyk is one of the few boxers to hold all four major belts in his professional career. The Ukrainian is a former undisputed cruiserweight world champion. Currently, Oleksandr Usyk is one of the best pounds for pound boxers in the world. He sits at #4 on the TBRB and the Ring Magazine ratings while ranking #7 on ESPN’s list. The major source of Oleksandr Usyk’s Net Worth is boxing and sponsorship deals.

After having a successful amateur career, he turned professional. This year, he will be up against Anthony Joshua for the heavyweight title. This would be the biggest fight of his career. Usyk started his career in cruise weight, and with time, he has moved up divisions.

According to SPORTEKZ, the Oleksandr Usyk net worth is estimated to be around $4 million. The major source of income for Oleksandr Usyk is boxing. From his last three fights, he has earned more than $1 million. After his fight against Anthony Joshua, his value is expected to reach new heights.

The Ukrainian also has his promotional company called Usyk-17 promotions. He earns a good amount of money from the promotions.

Boxing apparel and equipment company BoxRaw endorses the former undisputed champion. Furthermore, he has endorsed a number of brands on social media. Rival Gloves also sponsor Oleksandr Usyk for his training and fights. The 34 years old has his own foundation called Oleksandr Usyk foundation.

Usyk has a 72% knockout rate. The 34 years old won the inaugural World Boxing Super Series by defeating Murat Gassiev in the final. This was where he was crowned undisputed cruiserweight champion.