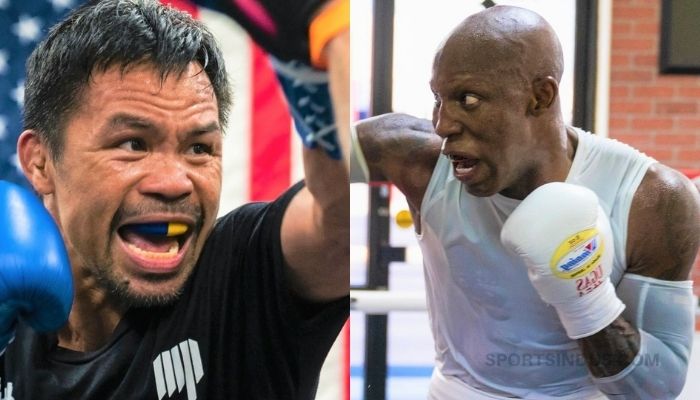 Manny Pacquiao vs Yordenis Ugas Purse Payouts: How Much will Fighters Make?

Manny Pacquiao vs Yordenis Ugas fight purse: Both the boxers will take home a massive paychecks for their performance on Saturday night.

After Errol Spence Jr. was forced to withdraw due to an eye injury, Manny Pacquiao faced WBA (super) welterweight titleholder Yordenis Ugas. Cuban boxer Yordenis Ugas defeated Manny Pacquiao with a unanimous decision to win the WBA welterweight title successfully. The last time he entered the ring was back in 2019 where he faced Keith Thurman. He defeated Keith Thurman via split decision. The boxing legend will fight against a Cuban boxer to take home a lucrative paycheck. Manny Pacquiao vs Yordenis Ugas purse is based on a fight contract with the promotion and PPV numbers.

Manny Pacquiao is practising hard for the fight as he will be stepping into the ring after a two-year hiatus. Since it is a title fight, along with the WBA (super) welterweight title, a whopping sum of money will also be at stake. Both the fighters will be earning a huge sum of money from the fight. Here are the details about Manny Pacquiao’s fight purse.

As per the report, the 42-year-old Philippines international is expected to receive a guaranteed purse of $5 million and his total earning could be around $25 million depending on PPV sales. However, in Pacquiao’s last fight against Keith Thurman, the boxer took home $10 million as guaranteed money.

Although, if we look at the current situation, a $5 million guaranteed sum is also good. In the covid era, the guaranteed sum of $5 million is pretty fair. One thing is for sure, the amount he will be earning is pretty less if compared to the price money he used to earn during his prime.

Along with the guaranteed sum of $5 million, Manny Pacquiao will also get a share of PPV sales. As per the sources, it is believed that this would be Pacquiao’s last fight of his career. But, looking at his physical & mental fitness and dedication, it looks like he is not in a mood to hang his gloves.

How much money will Yordenis Ugas make from his Title Bout?

The earning of the Cuban international from his title fight against Manny Pacquiao has not been revealed yet. However, if we look at the purse of his previous fights, he is also expected to take a whopping sum of money home.

The WBA (Super) welterweight title fight will see both facing each other in a 12 round bout. The fight would be an interesting one. Manny Pacquiao has a huge experience of title fights. Pacquiao vs Ugas live stream will be shown on FOX PPV from the T-Mobile Arena in Las Vegas, Nevada.

At the same time, Yordenis Ugas is the current champion. He would be aiming to defend his title. Pacquiao is the favourite to win the fight.

After the step down of Errol Spence Jr, FOX’s hope to hold the successful PPV is now on the shoulder of Manny Pacquiao. Fans were expecting to see a fall in PPV prices, but FOX is not in the mood to decrease the PPV price ($74.99).