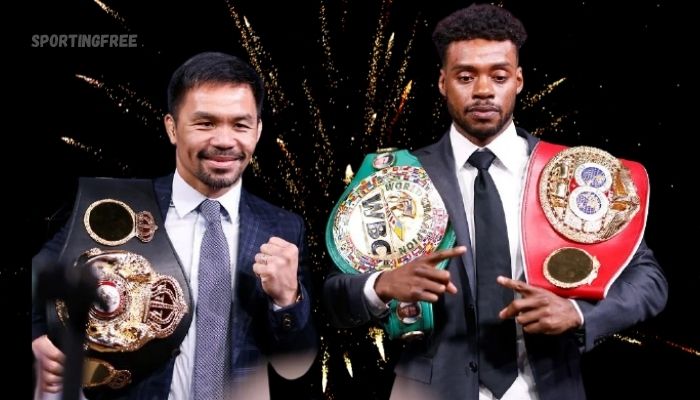 Manny Pacquiao vs Errol Spence Jr fight purse: Both the boxers will receive a lucrative paycheck for their performance in the ring at Las Vegas’ T-Mobile Arena.

The 42-year-old Legendary boxer Manny Pacquiao will up in the ring against undefeated Errol Spence Jr on 21 August 2022. There will be many things at stake in the massive fight for both boxers, which makes it a thriller boxing match. However, apart from the victory, both fighters are set to pocket a lucrative paycheck for their performance on Saturday night.

Spence Jr, a 31-year-old who holds the WBC and IBF belts, admitted that the Pac Man is tough to beat inside the ring. Pacquiao fought last in 2019 against former unified welterweight champion Keith Thurman Jr to register his 62nd victory.

The legendary boxer will face one of the American boxers Spence Jr, also called ‘The Truth’, for the vacant Ring magazine title. Let’s see how much Manny Pacquiao and Errol Spence could earn after the fight.

Both the boxers are set to receive a massive payout for the Pacquiao-Spence Jr fight in Las Vegas on August 21. The earning of millions from the bout is likely to boost Pacquiao’s net worth while Spence Jr will take home the biggest purse of his boxing career. Here’s Manny Pacquiao vs Errol Spence Jr purse and how much both fighters will make on Saturday night.

Although the legendary Filipino is about to retire, he still takes home the largest share of the Pacquiao Errol Spence Jr purses than the Texas native.

Pacquiao is guaranteed to take home $10 million from the super fight, and after including the share of the pay per view sales, his earning could reach $25 million depending on PPV numbers. The American star Errol Spence Jr to earn a guaranteed purse of $7 million, while his total estimated payouts could be around $10 million based on pay-per-view points share.

In the last fight against Danny Garcia, Spence Jr PPV attracted 250,000 PPVs in the US, resulting in $18.75 million from PPV sales. He took home his career’s best earning $8 million from the fight.

The Pacquiao vs Spence fight is available on pay-per-view through Fox Sports’ Premier Boxing Champions. There is no doubt that Pacquiao vs Spence Jr purse will be bigger and have better PPV figures. According to reports, the broadcasting network Fox is expecting to cross the mark of 700,000 PPV sales and the arena to be jam-packed.

Boxing fans in the United States can watch Pacquiao vs Spence Jr live stream on Fox Sports PPV while the UK broadcaster is not yet revealed. You can buy the tickets for the mega-fight here.

What is Spence Jr and Manny Pacquiao’s net worth?

According to reports, Manny Pacquiao’s net worth is $220 million, while Spence Jr’s net worth is estimated at $8 million. That means the American will take home the biggest chunk of his career after the most awaited fight.

The above purse payouts of Manny Pacquiao Vs Errol Spence Jr are based on the research and not officially announced. The payout money will majorly depend on PPV revenue.